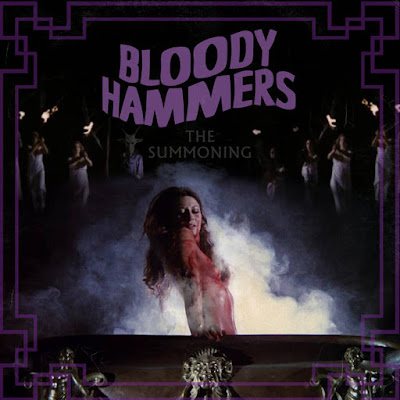 This is not my first dance with these guys. In the first two songs I am already more impressed with what they are doing here than the last album I heard from them "A Lovely Sort of Death" At first this more stream lined sound made me think of Ghost, but then after a closer listen it was actually H.I.M who they were closer in the sonic spectrum. There are hints of a more power metal like traditional metal sound, though they keep it as dark as a tongue in cheek horror movie. All the evil is purely theatrics. They back off and let the keyboards play a larger role in the title track as the vocals take on more of a croon. It is not as heavy as the first two songs and works more off melodrama. There is more chug to the guitars on "Fire in the Dark", but the more metallic drive gives way to the goth rock side on the verse.

The vocals are belted out in such a way that makes it seem less dark. If he sang lower it might work better. He does not have a bad voice it feels like he is over singing. Despite the vocals they do manage to capture more of a goth sound on "the Beast is Coming Out".  There is more metal to "Welcome to Darkness " while staying close to their goth side. The lyrics need to be addressed. They are trying their best to be spooky, but come off more campy. There is a more ballad like turn with "Condemned the Prisoner" . It does build up in typical late 80s fashion. Lyrically it about a prayer from jail so it's a hard right turn from the demon songs.  The  H.I.M vibe is pretty strong on "Far Beyond the Grave". As a song it still works pretty well.

I think some of this would just have to grow on me. The vocals I am still on the fence with. I will give this album an 8. If you are a fan of late 90s goth rock...like H.I.M, then this should be up your alley as long as you are not rigid with how sincere lyrics must be. Like cheesy horror movies there has to be some suspension of disbelief. I beleive these guys more than Ghost, and there guitar have more punch, I would also say they are darker than Ghost.