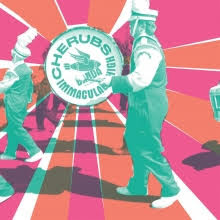 These guys have been around since 91. They come out of the same scene that spawned Sonic Youth, though they are from Texas.They explode with fuzz and feed back on the first two songs, the second being more punk of the two. I think I prefer the more textured and grunge like sound on the second song. They can get too noisy which they prove on "Tigers In the Sky" . I it all out the whole time with no dynamics or melody. They back off again on "IMCG' this gives the vocals more room to sing rather than rant against the squeals of the over driven guitar. The bass drives this one and the guitar lays back for more atmosphere. The direction they take the guitar in wavers on the more sonically intense side of shoe gaze.

They mess with the formula finding more angular drive on "Old Lady Shoe". The album begins to take a turn that is more of a pulse than the noisy battering they hammer you with at first.By the time we get to  "Cry Real Wolves" I begin to get bored , All the songs while different to some degree begin to sound the same. I think dynamics are a problem along with the fact that any time noise is the form of sonic currency on the table you can pretty much rule out hook There is a more grunge tinged strut on "Full Regalia". Most of the lyrics have been obscured until now . I hear something about politicians , after that point it is a pounding blur.

The last song pretty much sounds like all the others with a variation in the pounding. The bulk of band who use noise as part of the stock and trade of their sound often compromise song writing for this. The only two exceptions I can think of are Sonic Youth and Swans. Teah you can try to argue bands like Nine Inch Nails, but that is a small percent on the outskirts of their songs. So this album has moments the more grunge one being the best side of equation. I will give this album a 7. It is being released on Relapse Records.