Abrahma : "In Time For the Last Rays of Light" 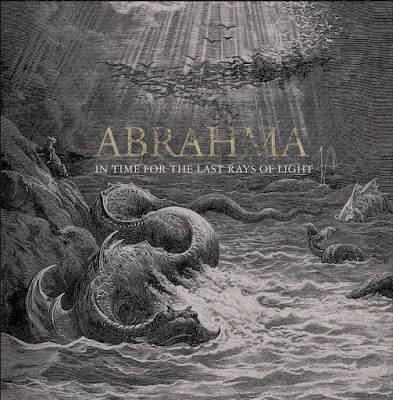 There was a time when it seemed like the French were beginning to dominate black metal. Now they are gaining ground when it comes to doom. These guys are very close to the sonic zip code of  Hangman's Chair. The vocals are emotive against a dreary back drop. The difference is there is more of a blues influence creeping around the corner of the opener. One the second song the vocals take on a more death rock croon. They switch things up as the song progresses building into a brief flurry of blast beats. The death rock vibe continues into the next song. A lumbering sludge like riff stomps into the song. Some times the songs drag a little when they wallow in the shadow of their own despondence. Normally this is the feeling I want, but it requires a certain level of pacing .

The temp picks up some for "Last Epistle" . The vocal's have more hook to them. This might be the album's song. It has a solid slow. The heavier chugs come in to accent the tension. They do not have a set formula . but  "Wander in Sedation" revisits some of the themes we have heard earlier in the album. They dig deeper into darker creepiness with "Eclipse of the Sane" . The chorus to this song is pretty strong and gives it the edge to make it more compelling. The album closes with "There Bears the Fruit of Deceit" . The vocals are even stronger on this song. A more metallic riff comes in and gives it more of a  doom groove.  This builds into one of the album's heavier moments with throaty yelled vocals and more of sludge like sound, This flows back and forth from a more melodic part.

I like all of the elements employed here, though the sparse blast beats do not seem that necessary when they do crop up. It will take another listen for the lyrics to sink in .I know this album is supposed to be about mental illness which is a topic I can relate to. I will round this up to a 9.5 as it might not be perfect in terms of the songs pacing, but they do use some of many favorite elements to create this and write songs rather than just play with these sounds.