Jess By the Lake : "Under the Red Light Shine" 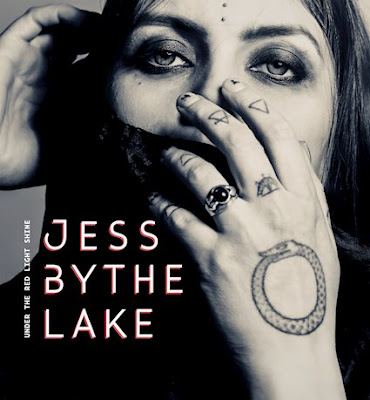 When the album opens with the title track. the sultry tinge of blues feels more like she has found herself in her voice than what I heard from her with the Ancient Ones. She I say there is a lot of Heart in what they are doing here I mean Ane Wilson. "Freezing Burn" has some cool synths in it but is less focused than the opener.  On a song like "the Wait" it is hard to imagine that she toured with King Diamond, as this song is in the same zip code as Amy Winehouse. I don't think this more Billie Holiday gone 60s rock direction plays to her strengths as much as the first two songs. "Halo" is more dynamic and moodier, which I think works better for her . This also feels like it is closer to who she really is.

There is more of a groovy rock n roll feel to "Nightmare" that is not far removed from what she used to do. The use of piano and some of the accents remind me a little of Guns n Roses. I would say where this album doesn't connect with me fully is the fact it's not all that dark. It does get a little darker on "Legacy Crown". I can also appreciate the 70s prog leanings, but her old band was also all about that life. This is probably the  album's best song as it creeps and slithers. They stay in rock n roll mode with the more staccato riff to " My Hands". The song it self makes me think of Fiona Apple. There is more of a psychedelic feel to "Interstellar" .The vocals kind of counterbalance the songs more surreal aspects and ground it.

I like this album better than the bulk of the stuff I have heard from her old band. This album is more original in it's retro flare even with the influences that are occasionally worn on her sleeve. I personally won't give this many repeat listens , but it is not dark enough to fall in line with what I typically listen to. I will give the album a 8. If you are into the retro rock thing served up with an ample side of pop then this is for you.  It comes out June 7th on Svart Records.

Email ThisBlogThis!Share to TwitterShare to FacebookShare to Pinterest
Labels: : album review, "Under the Red Light Shine", 8, Jess & the Ancient Ones, Jess By the Lake, rock, Svart Records