Silver Snakes : "Death and the Moon" 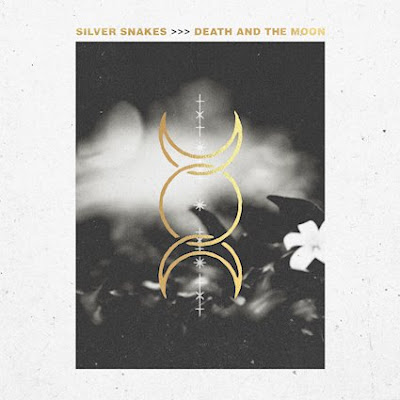 Not industrial , but influenced by it in the same way rock bands like Stabbing Westward and God Lives Underwater were in the 90s. There are electronic beats, but that doesn't mean they are industrial as Radiohead has those at times . There is at times a Nine Inch Nails sense of angst.  The chorus of "Wool" helps give a hooky sense of dynamics and prove they can write a fucking song when they feel like it. Some times the get too noisy for their own good and the over drive over powers what might have been a decent song if different production choices had been made.

Some times the Nine Inch nails influence is thicker than others.  I like the groove to "Black Fire'. The singer has room to open up and sing with more soul. Sure there are familiar elements, but it is worked in with what feels is more natural to them and a glimpse into who they really are once their influences are not so blatantly worn on their sleeves. There is a more urgent brooding to " Dissolve". It creates a more interesting layer to the melodic drone they hit you with.  By the time we get to "Lavender" I am listening for the moments that do not sound like Nine Inch Nails, as I have already lived through Filter and the parade of those kinds of bands from the 90s. So the female vocals and the more chilled out vibe are welcome. When the more grunge tinged guitar cranks up there has been more of a dynamic spread to make it appreciated.

"Gone is Gone" goes from the introspective brooding to loud rock guitars in a way that recalls the good cop bad cop , loud to soft dynamics employed by the alt rock of 90s acts. I will round this one down to an 8.5 as it leans so heavily on the Nine Inch Nails influence. If I heard more of who they are I might have gotten more invested in this album. It sounds good and they have decent songs, if you are into industrial rock acts with more emphasis on the rock side, you might dig these guys.