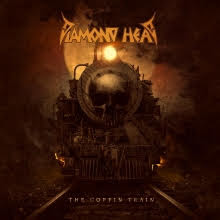 It is hard for me to wrap my head around a Diamond Head album without Sean Harris singing on it. His voice is what is so distinctive to the band that I felt set them apart. Sure they were the proto thrash band that inspired Metallica, but his voice held something very unique that sold those songs, which could have otherwise been warmed over Judas Priest. Tatler  has been parading around as the sole member of this band since 94. There is a foot in both worlds here. It sounds like who they were and makes a decent stab at feeling current . Sometimes this singer reminds me more of Chris Cornell in his upper range. He sounds more like Harris on "the Messenger". The title track is even more melodic . It sometimes sounds like grunge meets power metal. The vocals are at the forefront of the mix so it's hard not to compare them to the glory days . There are no "Am I Evils" on this album , but there are moments when they try to recapture that.

The verses of "Shades of Black ' is effective, but the Soundgarden thing persists. Its a rock and a hard place, because these guys did invented some of  metal riffs we hear recycled by countless bands with a song like 'the Sleeper' you sometimes feel like you have heard it before. Though these songs are generally well put together and catchy. The first mis-step that doesn't feel as inspired is on "Death By Design". They are a little more back onto their sound with "Serrated Love", but the song's groove is a little odd for these guys. The more staccato "the Phoenix' finds the vocals having to do most of the heavy lifting. I think if they sat back into the guitar a little more this would really allow us to hear how these riffs stack up in the big picture of what they are doing here.

Obviously even though the singer does a decent job and gives it a more modern sound than if they tried to recreate "Behold the Beginning " they are such a central part to this band's sound. This is a sticking point, because, there is nothing as ground breaking here as when these guys were in their prime. This proves timing is every thing. Still the album sounds really good and the song work for what they are. I will give this album an 8.