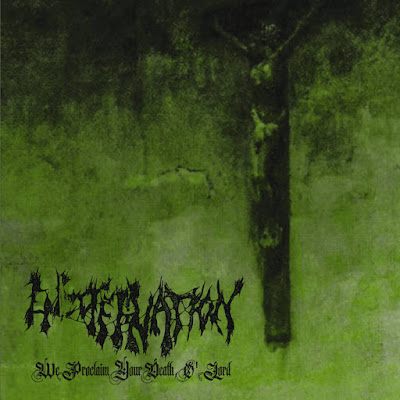 The first song on this band's fourth album drips more than it moves. The vocals are buried in the murky mix. You sense there is a growl somewhere. Extreme metal be it fast or slow can be so oppressive that it comes across impressive. This wears off after the first song and then they are faced with the question. But can you write a song. This year the trend seems to be band's that have a good sound , but it never follows through into good songs. Why is this so important ? Good sounds come and go , good songs stand the test of time. The second song has more atmosphere than the first which is more of a menacing throb. The vocal continue to be a shadow. More of a low end frequency that is almost there.

I was two and a half minutes into "the Keys of Hell and Death" before it sped up into more of a death metal section and I realized the album had moved onto another song. I love funeral doom. This is on the more death doom outskirts of the genre. I think the big difference is the lack of guitar melodies creating a requiem . Here is the desperation of being buried alive as the distortion suffocates you. Four minutes into "Robe and Crown" before the vocals surface in a more prominent fashion to suggest this is in fact a new song. It speeds up into a tremolo picked section for a brief black moment, but otherwise rides the same pulse.  The longest song is still around the 8 minute mark, though at many points it all seems like one long song.

The buzz of guitar has a moderately more intense tremble at times. It generally relies on hanging over the feedback of the dense fuzz being summoned. There is a little more blackness haunting the edges of  the last song. I can appreciate the dark and despondent mood, thought mood is never something in and of it self that keeps me listening. I will give this album a 6.5, if you are more into density and intensity and less about songs then this will be more back ground music for you.