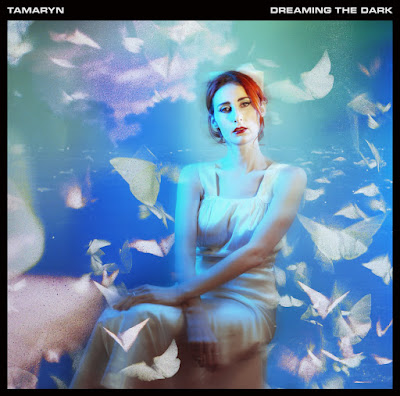 After clicking through and endless stream of albums from bands with good sounds but not good songs, it was a welcome relief to find an album that is focused on songs. I really liked her 2015 album "Crane Kiss" so that is the bar that is being held for her newest. It doesn't have the dense shoe gaze fog to it and is more stream lined like 80s new wave pop. Her voice is more lilted in more of an Annie Lennox direction. The production mimics the era being recaptured as things are purposefully more lo-fi and analog sounding. This is most profoundly felt in the beats. "Terrified" has a stronger melody and more nuanced vocal performance than the opener. I can hear and influence from both Tears for Fears and Roxy Music in the instrumentation.

There is a marginally darker sound on "Path To Love" as she sings in a lower alto. The guitar sounds on this album began to take on a little more of a Cure like quality in the effects that they are run through. This is more pronounced as the album gradually grows even darker on "Fits of Rage" . The vocals are smoother, yet get angrier on the chorus . This is interestingly counter balanced by the way she throws her voice around.  I know I am only four songs into this , but it seems like this is going to be the album's best song.  The album continues in more of a 4AD direction on "Paranoia IV" .  The vocal to this song is the first hint of Siouxsie have detected, which would have been an easy default mode. Things shift to more of an upbeat Depeche Mode vibe with "Victim Complex". The chorus to this song is pretty solid.

The dreamy "You're Adored" . Finds the vocals taking a more ethereal sound, and not in the more dominant place in the mix that they were on the pop songs. This is given a hard turn to the opposite direction for "the Jealous Kind".  It's almost a few bpms to happy for me. Things return to a more shadowy place on the title track that closes the album. While it is a little anti climactic, it's a decent song. Over all I will give this album a 9, I need to give a few listens with head phones to really sink into it.