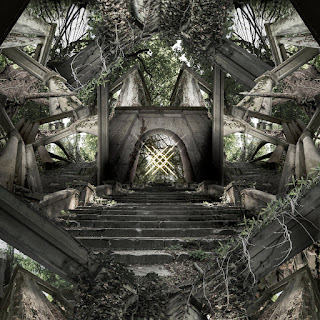 So I found these guys in the comments section of a post Revolver Magazine made asking who was going to be the break out band of 2019. I listened to a few of these bands and that review is here...

This is the band's second album and it opens with  a faster more metallic take than what I heard the band do previous , which was the more ballad like title track from this album. It sounds like a pumped up version of Sliversun Pickups. Not really blown away by it. I can also hear less proggy stabs in the direction of Coheed and Cambria on "Omega". I think the more uptempo stuff fails to let shine the previous ear for melody that made me want check out an entire album in the first place. In this song when they do slow down it's an improvement. It is not until "Through Ash" that I hear any of that. The guitar playing is skilled and well produced. "Through Ash" is a vast improvement as it feels like they are not trying so hard and it flows in a more original direction. When they do build it up there is a greater sense of dynamics.

I think the problem with their more upbeat stuff is it all begins to sound the same. "Thorns" sounds like half the songs I have already heard on this album. Perhaps a more well done. Some of the more rock moments where they let up on the gas work well, and perhaps it's the drummer's fault as he tends to only have 3 variations of fast beats. "Motionless in Sky" .  In the more restrained progressive they are like a hard rock version of Dave Matthews. When they can create a blend of melodies and grooves like they do on "Thumb Spike" , why are they not doing this on a more regular basis as it is obvious this it where there strength lies . "Awe at All Angles" shows they can play at faster speeds and not have it sound like all the other songs. The title track does get metal at the end employing harsher vocals. The last song is kinda lukewarm, better than some of the fast shit though. I will give this album an 8.5, fun listen, nothing profound or ground breaking in any way.