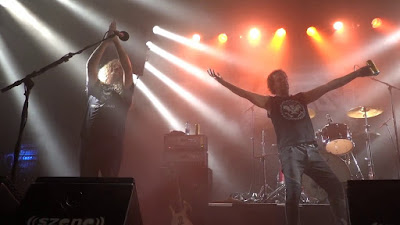 I rarely get out for shows these days. Back when I started this blog I went to one a month Since then my depression has gotten worse and I would rather stay at home than be around people. This could also be called getting older, but it feels like more of my mental illness, as when I hear about the show I think "Oh, I would like to see that" But the closer it gets the more I talk myself out of it. The last show I went to was Rob Zombie in August. I had the intentions of going to a couple more with my girlfriend , but life happened and those shows did not. So it was a big deal for me to get out of the house to see Voivod, who is one of my favorite bands. I have  seen them twice before, so that could have been more fuel for me not to go , but I made it out even it it was a last minute thing on my part.

Amenra  started off their set with atmosphere, but when they kicked in they hit so hard you felt it with your body as much as your ears. Ok maybe they were not as loud as Swans , but it was powerful and they really poured themselves into the performance, you could feel the energy on many levels . As much as I love Voivod if I am being honest with you and myself they were the best band, in terms of having a striking visual performance and being sonically over powering. Granted what Voivod does is very different and they were the odd band out on the bill. The boys from Belgium had a screen behind them and projected black and white nature scenes that really added to the atmosphere.

The first time I saw Voivod in the late 80s they had more of a visual spectacle as well. With a smoky stage and eerie lighting and Snake in a gas mask. This time around the main weapon in their arsenal was a wealth of songs. 36 years worth. I also saw them touring for "Target Earth" so was aware how the new stuff blended with their more classic songs, but this time around it was more seamless. The two things they really had going for them aside from 36 years of experience under the two founding members belts, was the set list and the drumming. Away is one of the most under rated metal drummers. His double bass is on point and he does everything so effortlessly.  As far as the set list goes it was like they  were taking requests for me as they played every song I would have yelled out... "Into My Hyper Cube" , "Ravenous Medicine", "Psychic Vacuum" and the biggest surprise was "the Prow" from the "Angel Rat" album.

Yob was headlining. I am sure this is due to being the band with currently the most records sales, as Voivod, was the most established. If Voivod was going to headline then Yob could be wedged between the two, but Amenra is a hard band to follow. Granted the have more in common with Yob stylistically as both bands have the huge monolithic riffs to trample your ears with. A friend of mine said that he feels Yob is like Cathedral on a fraction of the drugs and with a siren singing. I can hear that, but after Voivod they seem more simplistic. The work at more of a pulsing throb than a proggy space journey. Overall it was an interesting look at metal past and present.
Posted by Wilcifer at 6:20 PM