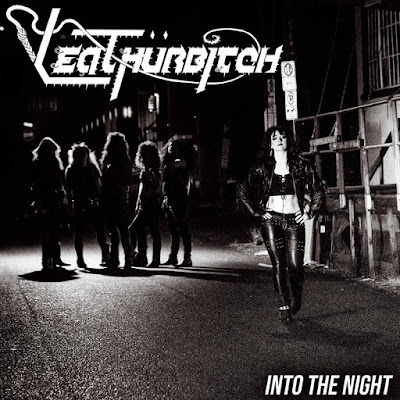 Say a mix of trash and hair metal and I first think "Cowboys From Hell". This Portland band digs back earlier in the 80s owing more to Diamond Head. The singer can fire off Halford like falsetto, though the mid range he uses in the verses are not as refined. Like many bands I have heard lately, they have worked to achieve as sound , but the song writing is kind of crude, though the average band back in the day was fairly straight forward leaving bands like Flotsam and Jetsam to be the exception.  By the time we get to "Sleep City" the novelty wears thinner. Since I was around for this kind of thing when it first came out , it reminds me of my musical tastes as a child that did lean more in the direction of Grim Reaper and Motley Crue. I think what doesn't connect with me is while I likea good metal yodel what they do is just not dark enough/

There a few phrases where I can hear his non head register holding some potential , but over all it seems like a place holder for a yodel to come. Unlike say King Diamond , these notes are just popped off with up him staying up there for any length of time. "I"m Insane"  is a cover of the Ratt song, though I don't it credited. Steven Pearcy has more grit to his voice. I do think it speaks to my point about sound vs song writing as my favorite song on this album was written by someone else. I know it's a vulgar concept, but I listen to the lyrics and put stock in them so this certainly dampens  "the Search" , as those lyrics are terrible.

The last song is very middle of the road, lacking any sense of danger or aggression. So it's blah, not the worst, but doesn't grab my ear do think I would have liked these guys more when I was 12, but kinda been there done that and got the albums that do this better. If you are a 12 year old who has never heard this before then it works. I'll give this album a 7, a 6 without the Ratt cover.