the Howling Void : "Bleak and Everlasting" 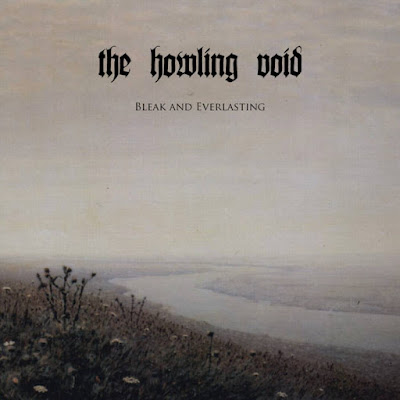 This one man band from Texas is back with more funeral doom. I foresee two problems here. The first being a typical one with heavy bands no matter the genre. They get the heavy sound , that might impress for a minute, but if you have discerning ear then after the first song you find yourself asking "but can you write a song? The second problem is in having all the expected trapping of a sub-genre artists can forget the most important ingredient is themselves."    there is a slight sonic expansion to "the Lonely Road  to Nothingness" though the guitar melody is very similar to that of the previous song, It might be the synths that switch it up the most. If anything the atmosphere to it has a brighter shoe gaze quality to it.

"All the World is a Grave" is an awesome song title for a doom song. Bells are added at the beginning , which helps break it up, but dynamically things do not change a great deal and this could be a continuation of the previous song if it had taken a darker turn.  The album ends with the 11 minute "Silence at the End of Time" , For a song to be long , which by the standards of this sub-genre it's not as long as some, but there is nothing that really justifies this as the melody seems to have come from the previous song. It does ebb down into synth that have a choral sound , but then the same bell tone is used. So it is very redundant.  I mean I went down stairs put some laundry up, went back to my room, nothing changed. Go back down stairs to throw away trash, come back up still the same thing

I will round this down to a 6.5, sure a great deal of funeral doom doesn't come out , but are you able to really listen to the same drone over and over. I think the guitar melodies put it over droning bands like Sunno. Some of the fault lies inthe fact the drums are barely there every thing lies on the guitar. The bass tone could carry more thunder, because it's not very heavy. This is closer to shoe gaze than doom at times.
Posted by Wilcifer at 5:36 PM