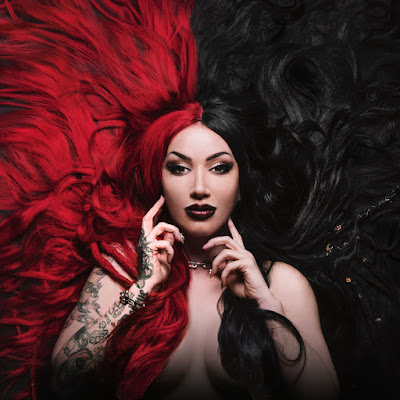 As far as more main stream nu-metal bands go I have typically liked what this band does. Ash Costello's vocals seem to get better with every album. Slick arena sounding production helps the overall sound, but it is the hook in the chorus that really sells it. Can they bring it like this for the entire album? Well they go a more melodic and somewhat pop route on "MissUnderstood". The guitar kicks in with a similar crunch that In This Moment uses . Sometimes the melodic pop elements work better than others. "Skeletons" just doesn't have the same quality of hooks the previous songs have. The title has more of a groove which is the other key weapon in their arsenal. The only problem is the chorus has too much of a major key thing going on.  However I do really like the more overt pop of "Shut Up" .

"Done With You" is where the album begins to take on more of a radio rock formula. This is broken up a little by a catchier vocal on "Break My Body" . "Sorry Not Sorry" has more hook to it. It is somewhere between pop and nu-metal. While goth is a term that gets tossed around ith this band it seems to really only apply to their image. I would sultry is a better description of their sound than dark. Though  I guess dark is relative and to mainstream markets this is darker than Taylor Swift or Katy Perry.  They get a little darker on "My Monsters" , but it's not much different than the bulk of the album. There is a more spooky under current to the melody layered in "Nocturnal". It is like a Halloween version of Britney Spear's "Toxic" .

I think the strong songs are pretty fucking catchy and the grooves do tend to stick with you. To most who read this blog this is going to feel more like pop than metal, but genre be damned they are good at what they do. This album has the kind of huge sound that band's doing this sort of thing should have. I think there is more texture than many of this band's peers. I will give this one a 9 and see how it sits with me.