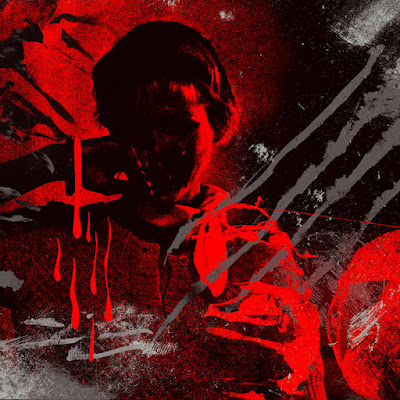 This French duo delves into a very interesting realm of blackness. The riffs lumbering like apocalyptic monoliths. It also seems like one of those albums where the opening song is so fucking heavy it is not until the second song that you are able to beg the question..."But can you write a fucking song?" They do prove themselves capable of deviating from pulverizing you to incorporate dynamics with atmosphere. The second song indulges in this even further which gives me hope for the album as a whole. The vocals remain very scathing. The guitar sounds gets creepy when it is not dense and metallic. While this is referred to as blackened sludge, it feels more to me like a down tuned and gritty take on depressive black metal. The melodic tendencies of the 3rd song create a mood to help solidify me thinking of them as a depressive black metal band.

They do begin to get angrier. This doesn't make them monochromatic. They can balance their anger with the vision of the hellish maze of musical torment the songs yearn to invoke.Where other bands might make the same amount of atmosphere feel shoegaze, these guys keep it creepy. Though there are some moments that do border being a darker take on post-rock due to the spacious minimalist arrangement. When the harsh vocals come in they always seem to get heavy, but aside from that I don't think these guys have a formula they default to. There as some weighty moments of guitar that have more of a doomy pound. This album really has incredible guitar sounds so they can play any brand of metal and sound vastly darker than their peers.

The guitar tones alone can not carry a record, so it is the beautiful sense of balance in their song writing that makes up the rest of the difference. The tremolo picked guitar and the menacing crashes of double bass certainly maintain the sense of sonic heaviness. I will give this album a 9. It's really well done and  for what it is pretty original sounding. Glad to hear France is back in the game when it comes to black metal.