Breaking Out Vs Breaking Bad : the Class of 2019 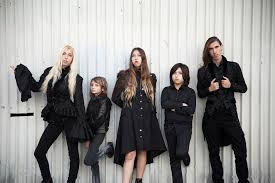 On Revolver Magazine's Facebook page they asked "Who Will Be 2019's Break Out Band" . So I picked ten bands whose names keep popping up. Granted this is Revolver so I went into it knowing it was going to be more mainstream than what I normally listen to. In fact there are a few bands that are rock n roll and not metal. Also what the fuck, how is nu-metal making a comeback, half these bands have a foot in nu-metal if not packing up and going to a Juggalo gathering. Here we go...

Song I checked out - "One Hand Killing"

These guys are nu-metal,at first  the vocals remind me of Methods of Mayhem before they totally try to rip off Mike Patton.  They bring it a little more into 2019 with djent like syncopation. They are good at what they do, if you miss Incubus these guys are for you.

Song I checked out - "Kai Tangata"

The guitars kick in like Slipknot, but then things sound like Sepultura going more nu-metal than they did on "Roots". The clean vocals are kinda typical. Nothing special here.

Song I checked out - "Pieces"

They are like a marginally more proggy version of  In This Moment . Their singer could use bigger tits. The guitar is better than the two previous bands.

Fuck the vocals are terrible. Other wise they are pretty generic metal core

Song I checked out - "Ghost"

Well this is the poppiest so far. But it is also most well written song so far. This is not metal even when it builds on the chorus. It is like Myspace never went away.

Song I checked out - "Crux"

This is not metal, but the guitar playing sounds good. This is like a pop country power ballad. The singer is pretty decent. These guys are neck and neck with the previous band. The singer sounds like he is from the Voice, as every thing is phrased with pop radio precision.

Song I checked out - "Take Control"

The riff is the most metal so far. I think it's a chick singers, she has a thrash metal. Not a great voice , but it works with what they are doing. Nothing that original.

Another nu-metal band, shit what is up with all these Hot Topic babies. These guys want to be Rage Against the Machine, but need a better bass player and drummer. The chorus sucks as it sounds like Linkin Park, who was the worst of the nu-metal bands.

Song I checked out - "Freak"

These guys are not bad, but there is a faint hint of Linkin Park that I am not sure about, as I hated that band so anything that reminds me of them is suspect, but these guys at least captured some of the darker parts of nu-metal that worked.

Song I checked out- "Enter Sandman"

Not sure why they were mentioned by multiple people as they are a cover band. To break out I think you have to write your own songs. Best case scenario they are a rock Hanson. Perhaps when she finishes growing up the drummer might be hot, not sure if that is enough to push them over the edge, since they are in Los Angles where that is a dime a dozen.

My verdict is it's a toss up between Moontooth and Badflower, though I would give Moontooth the edge as they are a little further removed  from the Myspace years.