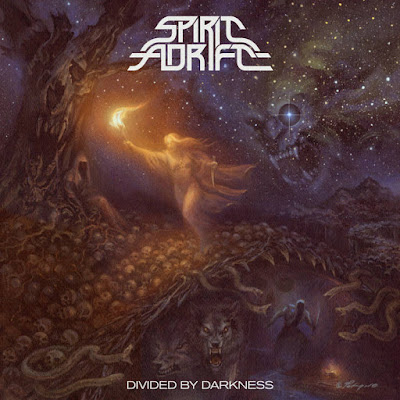 When these guys first came out there was almost more of a doom vibe to what they do. That was shed on the previous album and they are not looking back. This mutes all comparisons to Pallbearer.The vocals are smoother this time around and the guitars are more over the top. It is like if Ghost was committed to played metal. Not only metal, but the new wave of British heavy metal, which hasn't been new since the 80s. I like the title track more than the opener as it has more balls to it yet they manage to keep melody afloat. It's all about these guys finding the right balance of where do they want to take things. "Born into Fire" is also melodic , but perhaps so much so that it loses it'a balls.
There is some great guitar playing on "Angel & Abyss" thought the vocals seem a little unsure of themselves until the songs kicks in.

The bulk of the album is uptempo thanks to the fact lhere gallop is dialed in all the way from 1985. The guitar harmonies are also very keyed into the time period they are trying to achieve. "Tortured
By Time" is less impressed as there is less to really set themselves apart from the pack . "Hear Her" is marginally darker. It has hints of the guitar , but the vocals don't stray from   what we've already established that begins to feel like the guy is a one trick pony. There is a cool melodic break down with a clean guitar tone on "Living Light" , but aside from that it is not a huge shift from the other songs.

The most tasteful and possibly Iommi inspired guitar solo, if we are talking about Dio era, is on the last song. Then it goes into a more stoned strum that has more in common with Pink Floyd. Keyboards come to the fore front as well.It might be one of the album's best songs.  While I personally will not get a ton of repeat listens out of this if any, this is very well done so I will give it an 8.5. This album comes out may 10th on 20 Buck Spin.