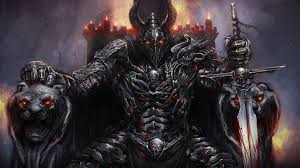 Told a friend of mine into power metal that I would make him a playlist of black metal for people into power metal. Not because I think everyone should listen to the same music as I do, but I think black metal gets a bad rap when it comes to preconceived notions of  the musicianship some of the bands posses. Even I don't like the bands that are raw and have more in common with punk. It might seem like the only thing the two genre's have in common. Truth be told I think it would be harder to make a  playlist of power metal for fans of black metal, since metal is like drugs you a tolerance for it then  one your threshold for heavy goes up it is hard to work your way back . For me power metal sounds too  happy. There is a genre that bridges the two...folk metal. Folk metal can have power metal qualities as well as black metal ones. Someof these bands might be more of a gateway drug to actual cvlt as fvck black metal, though regular readers here know that I am not a fan of solely using blast beats for the sake of using them. I already own Darkthrone's albums so I want bands that are their own entities. So most of these bands have some sort of epic quality that captures the Dungeons & Dragons like nature of power metal.


Emperor - "Curse You All Men"