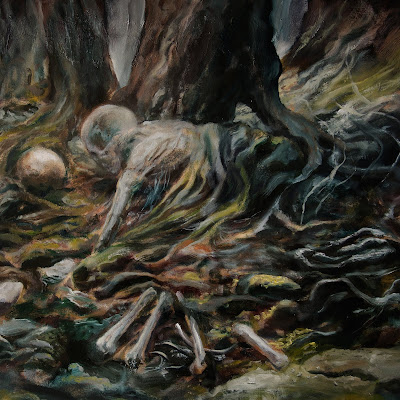 The funny thing about death metal, is even when hitting all the right marks of the genre, it doesn't take long for it to all sound the same. The challenge this band from Finland has is to not fall into this trap. I obviously like death metal since I come up with 10 albums every year that I think deserve to be in my annual 10 death metal albums of a the year list. There are many subsets of music that do not get their own lists. Bands like Morbid Angel, Carcass, Deicide, Incantation and Obituary have all put out albums that stand shoulder to shoulder with the classics of all time. Like black metal there are certain things we expect from death metal. Low growled vocals. This band does that . They are not distinct, but they are done well enough to meet the sonic requirements of the genre.  Double bass is another. It is not a steady stream, which works in this band's favor.  It gives "Reek of Loss' more of a gallop in place. When they do bubble up it's not in a blur of foot thunder.

They are not the most blazing fast death metal band. That is fine with me. They are also not so slow they get called death doom. They are deliberate. They have angular creepy riffs that bleed darkness.  They do get closer to the death doom thing on "Echoes Emanate Forms". They use weird
atmosphere in the back ground of this song that sounds like tormented ghosts going to hell. The pace does eventually pick up more. It's a steady flow through caverns rather than a speedy blitz. The drums are really far back in the mix. The guitar melodies that crop up often might for their place in this dense mix. I am not sure when they do speed up that doing so is their strongest sound. By the time we get to "Vanishing" the songs begin to sound the same. So to their credit they made it longer than most death metal bands in this regard.

If you told me this album was recorded in a candle lit cave, I would believe you. I do not think they sound spooky enough to be occult death metal. The lyrics don't have any occult elements that I can make out. There are enough dissonant guitar melodies to keep my attention, despite the lack of  drums blowing my mind. The vocals take on more of a croak on the last song. I will give this album an 8. It's pretty solid. I am not sure if it is solid enough to make the top ten list at the end of the year, but perhaps my expectations of death metal to come are too high.This comes out on Dark Decent May 31st.