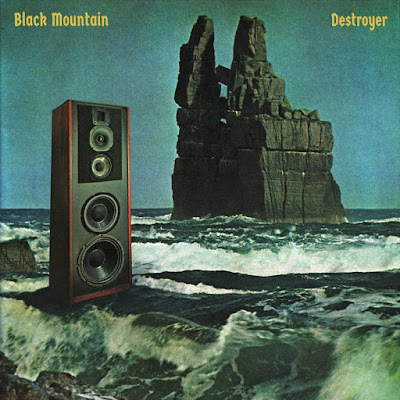 The opener is pretty much standard stoner rock fare. It is not util the second song that things get interesting as there is a robotic pitch-shifted harmonizing effect on the vocals that gives them a robotic sound that contrasts the more organic 70s rock of the instrumentation.  Granted an entire album with that effect would be tedious, but it works for this song. When the normal vocals come in it provides a more dynamic contrast even before the acoustic break down. There still strong psychedelic undertones to "Closer to the Edge". The retro synth sounds work well. This bleed into the next song "High Rise" which makes it feel like a transition in a longer song. The approach to the vocals feels more Psychic Tv. It is not as good as the previous song , but still pretty much finds this tapping into it's own sound.

"Pretty Little Lazies" combines elements of the Rolling Stones with Blue Oyster Cult and Hawkwind. Maybe there is a dash of T-rex in as well. Though this feels like it is coming from indie rock musicians rather than stoner rockers. There are hard moments , but it doesn't really cross over into metal. If you think it does that is because you are a pussy. That is not to say it is totally devoid of any and all Sabbath influence as some exists on "Boogie Lover" , but this is tempered with more psychedelics. "Licensed to Drive" reminds me of Alice  Cooper set against a Judas Priest riff/
. Rather than having Halford range the more often dead pan vocals are layered with a woman's who can sing. There is a Brian Eno era Bowie feel to the last song. This is even winked at as their is a reference to the man who fell to earth.

I will round this one up to a 9 . It barrows from elements of music that I like so the fact their influences are sometimes worn on their sleeves is ok with me. This album sounds great. But unlike my complaint this year that there are many albums where they have a good sound , but not good songs. This is not the case here and shows what a good balance of this should be. This album comes out at the end of May.