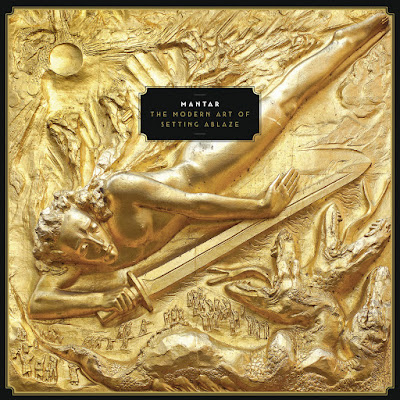 The German duo, is clearly not making sludge any more , this is a more thrashing affair with a Venom feel to it at times, High on Fire would be another reference point I suppose , though what is going on here is more refined and metallic that rumbling punk tinged metal. There is a palm muted chug to "Seek + Forget" it builds into more of  dense rumble. The guitar riffs have more of a classic metal galloping dexterity to them. There is a weird melodic section. There are shades of their older sound on songs like "Taurus". The vocals are largely a nasty rasp that is not quite a death metal growl and sound more thrashy. There is a more Mastodon like riff going into "Midgard Serpent". There is a great balance of melodic guitar riffs set against groove.

There is a more stream line post- thrash style riff to " Dynasty of Nails" . It's almost too stream lined as it is pretty much color by numbers metal. The rock groove gradually become more defined on "Anti Eternia". By the time it gets to "Formation of Night" it is almost at a more Tool like level of grooving tension. The vocals stay raspy. The songs are pretty condensed and get to the point "Teeth of the Sea" is just over three minutes, though it is more uptempo than the bulk of the album. "Funeral" The lyrics pop out a little more on this song.

Overall it might not be the most original brand of metal these guys cranking out, this album is heavy as hell and sounds great. In fact it could be argued this is the bands best sounding album.  The hooks grab you and make it a really album to listen to. I'll give it an 8 as some of the songs begin to sound the same and I already own all the Entombed albums.