Faustcoven : 'In the Shadow of Doom" 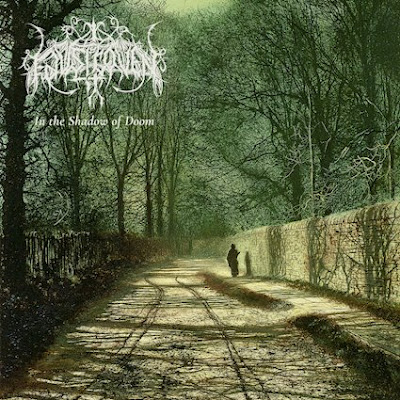 Falling in the fog somewhere at a dark cross roads where black metal meets doom comes Norway's Faustcoven. The riffs have more hooks in them than your average underground black metal band. The fact things are chugged in a more Celtic Frost fashion rather than blasting at you certainly factors in. The vocals are growled with a more sinister death metal intent as they are lower and almost gurgled. There is a bluesy riff that opens "the Devil's Share" and this certainly casts more of a doom like shadow over the album. "Yet He Walks" is darker , but it is also murkier and come across to me as a song not as well defined as the first two. The bass and drums are not as locked in with the guitar and perhaps things are given too much breathing room.

"Marching In the Shadow" has more form, it also weighs in heavier on the death doom side. The vocals stay in their low growl for the duration of the album. The guitars add a little more melody than what we have previously heard here. "Sign of Satanic Victory" is more straight forward favoring black metal with it's attack. "Lair of Rats " has a more powerful stomp to it's bulldozing gallop. The vocals are still a little more death metal. There is a more Sabbath like feel to the rock n roll injected into the riffs of "As White As She Was Pale".  While it is not the most original thing to do in metal, it sounds good here.

The last song is both a great deal slower and darker. I prefer this mood more, while as far as blackened doom goes I have heard other albums that gets the mix more to my personal liking what he is doing on this song works. As a whole this album doesn't expand upon his own personal style or do much more to further cement his identity. I'll give it a 7.5 as it works for what this is an will appeal to those that are hungry for this sort of thing, suppose I hear so much metal on any given week I need more to make it stand out from the masses.


This comes out July 31st on Nuclear War Now!
Posted by Wilcifer at 7:00 AM