The Twins of Evil : Marilyn Manson vs Rob Zombie 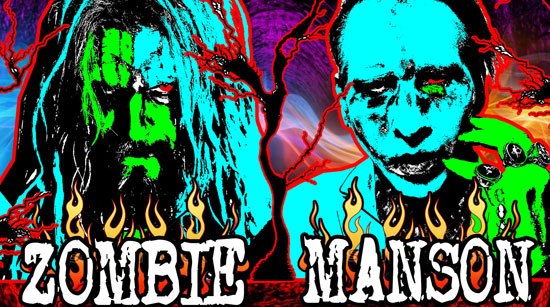 I'll say I went into one of the recent stops of this tour with Marilyn Manson's full discography in my iPod so the deck was stacked in his favor. I had seen both Manson and Zombie in concert before. Manson the more recent of the two, as I saw him open for Slayer in 2007.  Zombie I caught at an Ozzfest in 99.  I liked his "Electric Warlock..." album , though a bigger fan of White Zombie. So the deck was stacked in Manson's favor. My she-wolf (girl friend in muggle speak) had never seen either so was a clean slate only biased by the fact she knew I was going for the express purpose of seeing Manson and told her going into we did not have to stay for Zombies entire set. She was braving the outside world for this show in a new cast after a paw injury, so was total super trooper the entire evening though I tried to do what I could to make the night as safe and easy as I could. Ok I'll stop gushing and get to the meat of this. 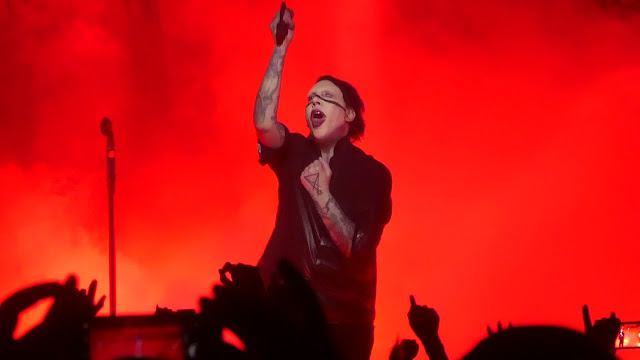 He was two songs into his set  by the time we got in the line being told she couldn't wear a spiked bracelet, which I pocketed rather than threw away...duh.In line I heard "This is the New Shit" and we walked up while he was playing "Mob Scene".  So we saw six full songs , which was more than enough considering how wasted he was. For "Say10" is seemed marginally more enthused. But he sat down to sing portions. He smoked a cigarette for this one which impressed the girl friend who had not seen someone smoke while they sang before.  He faked like he was going to play "I Don't Like the Drugs", but instead went into "Dopeshow". His first costume change also occurred where we wore a gaudy jacket that looked if Big Bird was a raven. "Sweet Dreams" was well received and perhaps the smoothest execution of his set. Though he kept hitting things with his microphone then acting surprised when it didn't work. I know part of his persona is not giving a fuck, but at least give enough of a fuck to do your job or go act like a baby in Hollywood. "Kill4me" was decent considering I had never heard it live before. It was when they went into the "Anti-Christ Superstar" songs at the end that things got really underwhelming. The title track with the Bible burning at the podium was better than "the Beautiful People" which put him on the map. It was also during his set my wolf realized two things, it was really fucking hot outside and there was literally no room in the seated area to dance. She was however pleased as she could cross Manson off her bucket list. 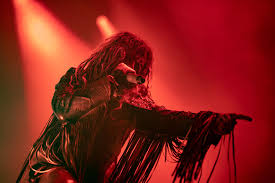 Rob was the underdog going into this. I had more experience with him in recent years working on Halloween 2 than I had his music. Manson's stage show had been underwhelming , so when Zombie exploded onto a stage lit up by video screens it was as impressive as the energy invested into playing the songs. Rob has to work harder for it as his range is somewhat more limited than Manson. He dominated the stage in terms of presence. While he talked about drugs later in the set , it was safe to say at his age Zombie was sober. "Superbeast" was pretty pumped up and high energy as well. Funny enough half Zombie's band once played for Marilyn Manson. Granted John 5 is an impressive guitarist so anyone he is playing with is going to have an ace in their sleeve.  I liked the movie playing on the screen while they were doing "Everybody is Fucking In a UFO" since it had Rob's wife being molested by aliens. He had all the ladies and she-wolves stand up on the chairs and dance during "Living Dead Girl" so I am glad mine got some room to dance here. The only fly in the ointment was "More Human Than Human" which seemed a little slow and like Rob could not keep up the pace of the rapped vocal. But if he missed the mark on one song then that put him well ahead of Manson. 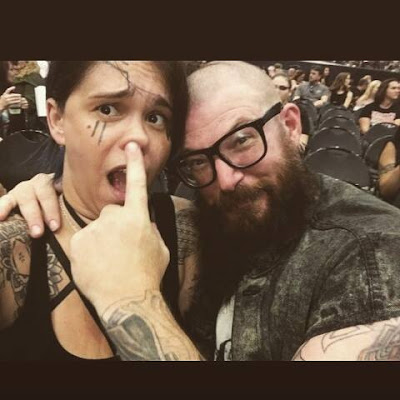 Right before "Gore Whore' we retreated from the seated section to the general admission lawn so the Wolf would have room to dance and vent some of the energy gathered from being housebound the bulk of her injury. Not that dancing in a cast is an easy task, but a beautiful creature can always pull it off. Before playing "Thunderkiss 65" Rob told the crowd to put away their phones for 3 minutes and was almost into the song before they stopped so he could tell someone to turn their phone off. During this song they went into a cover of "Schools Out", then closed the night with Manson coming out to join him for a cover of "Helter Skelter" . While we had a wonderful evening, it was clear that Zombie won this contest.