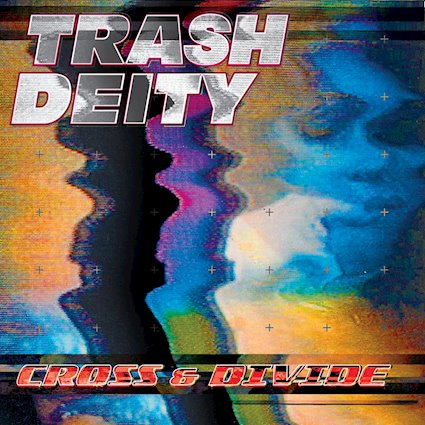 Here's one from Groovie Mann the lead singer of My Life With the Thrill Kill Kult and John Norten of Blue Eyed Christ. The first two songs do sound like Thrill Kill. Less of a disco groove and more like their earlier work, though not as dark. "Fame Games" has a little darker pulse with it's more cynical commentary. "Frantic Child" has more drive , but the vocals are getting a little stale at this point. I like the use of samples , but the song itself feels a little regurgitated. I'm not sure if I would call this industrial. I never thought of My Life With the Thrill Kill Kult as industrial just sometimes darker electronica. "A Perfect One" feels more like an interlude from a Revolting Cocks album.

While it doesn't have the strongest chorus, I like "Hard Drive". I think they could have perhaps benefited from taking other musicians on , rather than trying to do all of this themselves. "Finger on the Trigger" grooves along with a very 90s feel. It's in a weird gray area. Not really that dark, but still not pop. "Emotion Matters" has enough groove in it's futuristic drone to keep my interest. When we get to "Icons & Idols" I realize my only qualm with this album is the production on the drums could have been better. I feel if these beats really hit you then the entire album would have a greater sense of urgency to it.

I'll give this album a 7.5. Some of the songs work really well. I think the production value doesn't hold up to where Thrill Kill was at back in their day. It would be nice for Mann to have to measure up against himself in that manner, but he has a legacy to up hold. I thinks he likes the idea of being a rock star more than he seeks to invest into some of the sounds committed to this album. He more of less lives up to his end of the bargain, as he does what he does. I did not go into this expecting him to have become an incredible singer, I just wanted him to do what he does. Where he is accountable is more of an issue with quality control unless he was too high during the final mix. Granted I am not cranking this through studio speakers at present so maybe louder makes it better. I am not saying it sucks . I am saying he has to bring it like he used to.
Posted by Wilcifer at 4:31 PM