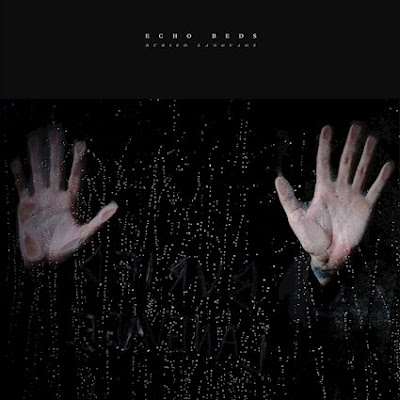 In the modern revival of what for lack of a better term we might call hipster industrial, since gone are the Hot Topic like trappings that once draped the Cleopatra records wave of these bands in the 90s. These guys are heavy , At the same time they are noisy and lo-fi. Most of the songs seem to work more of a drone than to really have a wide range of Nine Inch Nails dynamics. I supposed this could play off the drum programming. One thing I like about this resurgence of Industrial is that if you took these guys, Youth Code and Author& Punisher none of them sound the same. Things get darker on the title track. When I first heard this album it was late at night and I was tired. Upon that listen I heard more of a black metal influence in the vocals than I do now as I type this with my first cup of coffee in hand.

"Small Print" is kind of lost in the noise and I had to listen to it a few times to make out if it was an actual song. Rather than listen to it a fourth time I decide it's not an movie on. "The Flaw is in the Design" is as it works off a very defined guitar riff.  It's overall slower and more brooding. By the time we get to "So Many Ways In" it's clear that this projects prime object much like Godflesh before them is not to make you dance but create brooding throbs for the apocalypse to come. With that said their is almost a dancey pulse to the song after this , but in the same way that even the more angular rough edged Skinnyt Puppy can be danced to. "Only Surfaces" also finds it's own opaque groove.

"Access Control" gets darker and finds this project going down the bleak and blurry path that Skinny  Puppy first struck out upon. The difference being in some ways this reminds me more of old Swans as they are once again running off a dark throb. The album ends with their most conventional take on industrial as the beat captures a more defined groove. That is not to say they have abandoned the identity already established on this album. It still contains the unnerving layers of jarring atmosphere. I'll give this album a 9 and see how it sits with me. If you are a fan of industrial , but not tied to the idea of it having to sound like Ministry then it might be worth your while.