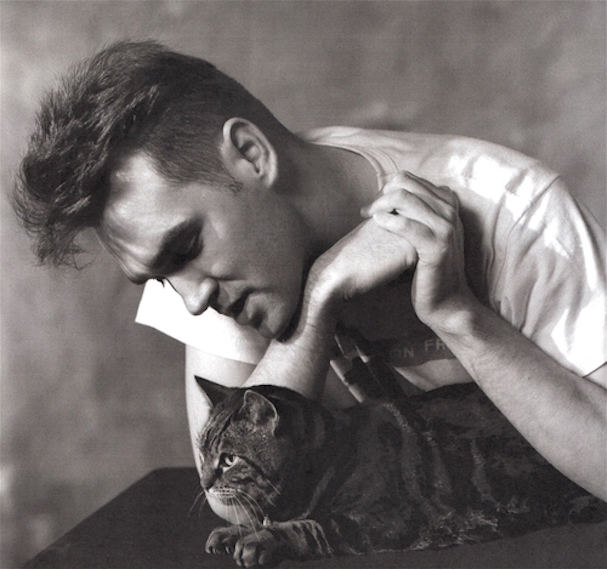 Keeping with the theme established last week where we featured on artist for the week's playlist. Granted it was aimed at one specific person, as I thought given their tastes in certain kinds of music that Nick Cave would be the perfect choice. This week I am focusing on one artist again. Many of these have been thinly veiled dedications, this week the fourth wall comes down in order for me to explain the why I picked Morrissey. Why would I not pick Morrissey is what you are asking yourself. originally asked what artist made them think of me and they said "it would be one we have discussed" so this artist is one that has probably come up the most in conversation  the most. While it depends on who you talk to , I think most people would say Morrissey or David Bowie if asked who is my favorite artist. The reason I would pick Morrissey to dedicate this blog entry to is because he is a summary of emotions.

Bowie is grandiose, and in fairness should be next weeks, but if I am going to pour my heart out to you it will resemble Morrissey lyrics. This out pouring  is not the pristine thing of movies, it's complex and uncompromising. Past pain might have left me slightly jaded, but that was pierced by the hope I could be seen for who I am . That longing is what Morrissey is all about. Some people might say Morrissey is depressing and those people have all the depth of a paper plate. Morrissey shoves an entire emotional spectrum into one song. As it should be because the dive into feelings at the rawest level is fucking scary. It require the kind of vulnerability that Morrissey is the patron saint of . It's perfectly imperfect messy maze of feelings that you are forced to feel, because you took a risk and let your self feel one.  The last song might be the most perfect. Its like Morrissey always has the ability to look into my soul and put it into words. To share a Morrissey song I am really sharing a part of myself. While this public display of affection might you dear reader the innocent bystander feel sick, just know all of these songs but two are all from different albums spanning Moz's career, so this is a very comprehensive look at who he is.

"I'm Throwing My Arms Around Paris"


"When You Open Your Legs"

"I Know It's Gonna Happen Someday"