Mirrors For Psychic Warfare : "See What I Become" 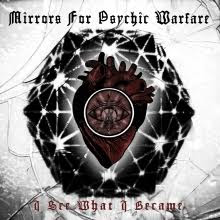 Right from the first few seconds of noisy atmosphere I can tell this is the perfect album for anxiety ridden moments at 5 AM after waking up from a night mare. "Tomb Puncher" is the first actual song. Scott Kelly is singing over electronic beats, but in a manner than would not be totally out of place on a Neurosis album, just coupled with more effects. "Body Ash " works off the same formula , but is not as effective after already hearing this dynamic. I think on "Flat Rats in the Alley"  what they do works better due to the fact it's darker so creates a different shade of intensity. On "Thing of Knives" things start to run together with the song that comes after. It starts off with more noisy ambiance which for me fades into the background since it's an effect and not part of an actual song, until a beat begins to form a minute and a half later. When the chant of "my reasons where unknown here" comes in then you are re-engaged.

"Crooked Teeth" starts more minimal and darkly builds into more of a throb as Kelly chants under this. Vocally he is pretty simple here. At first I was thinking this is almost like the industrial album you might have always wanted from Nick Cave, but Cave sings more and displays a more fluid range when he does. This is almost more like spoken word. Due to this mono chromatic vocal approach it causes a song like "Death Cart" that might have more going on musically sound like all the other songs. "Coward Heart" is almost like a sounds from the haunted house sound effects album. It work off of creaks and various glitches. His gruff spoken word is more at a Leonard Cohen like whisper.

I'll round this down to a 7.5 as the songs tend to be rather a one dimensional drone thanks to the vocals that just work off this gruff spoken word thing. This album is pretty dark and atmospheric. The beats don't always converge around these themes to propel the songs in an effective industrial direction. If you are looking for some dark and gritty background music where the spoken vocals would provide  much of a distraction then check it out. If you are wanting something as heavy as Neurosis or Graves at Sea then you are looking in the wrong direction.