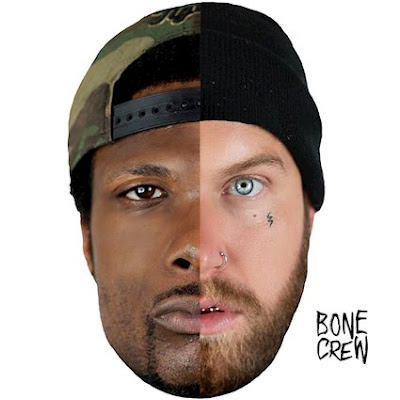 I like trap rap more than I like Hot Topic brand metal core. I will give Attila credit for writing catchier shit that the bulk of their peers . One thing I can say about this ep is that is reminds me of Upon a Burning Body's team up with Ice-T for their cover of "Turn Down For What?". The rapping courtesy of Da Boi J is not hindered by the sense of nostalgia that haunt Ice- T trying to stay relevant.   Without question this is dangerously close to nu-metal, which is traditionally not my thing. The first song that opens the album is the lowest common denominator. Its not until the rap comes in at the verse that it really catches my attention. The screamed vocals from the Attila  front man, just sounds like everything else from that genre. "

Back it Up" has a melody to it that reminds me of "Big Pimpin". It's a much better song than the opener and all of the elements mix together much better. At times some of the more abrasive elements remind me of Death Grips. "WDGAF" or...We Don't Give a Fuck, works pretty effectively as well though there are more bone headed elements in the attitude that brings to mind Eminem's more belligerent moments. "Real Ones" seems to find this project falling into more of a formula. The more death metal vocals that pop up are not my favorite , but I understand that is the zip code we are in. Some of the shifting heavier grooves toward the end of this song work really well.

"Tunnel Vision" doesn't work of the kind of hooks that I expect from this kind of rap. I suppose the more metallic side of this takes the emphasis off of this . Not sure if it compensates as well as some of the more stellar match ups of this kind that occurred in the late 80s or early 90s when this kind of pairing first came into being with actual metal and not Areosmith. I'll give this album an 8 which is better than what I expected going into it.