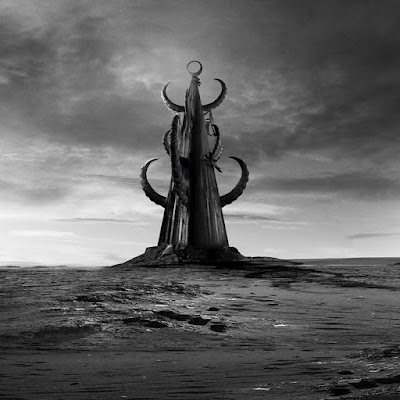 This band's second album came out back in May and has flown under the radar. It's woeful blackened Sludge that throbs against scathing screamed vocals . Occasionally the vocals drop down into a lower growl. There is a weird almost industrial pounding breaking down mixed with post- rock , so these guys are not afraid to step out and experiment. They have the dark sonic intensity that I am on the look out for in heavy music. Blast beats come in on the second and find the band heading in a much more black metal direction. While this was hinted at in the first song they are fully committing here. Sung vocals come in when the song slows down , but it doesn't feel like they are working off a good cop /bad cop dynamic and are well placed. The fact it remains dark and emotive certainly holds my ears.

"Raising Barrows" could fall into the black - gaze sub genre, but they don't fall into wanting to be Deafheaven when they go here. The vocals are a lower growl and when it kicks in there is more of a punch. The post rock swell does rise against something that mixes black metal with a more crusty sound. The drummer really earns his pay check when the song builds. After this song they go into something more straight forward , trading off between atmospheric sludge and black metal. After this they give you some breathing room and let the album simmer in more ambient post rock guitar. It retains a melodic quality , along with a darker brooding. When it blasts off into black metal it fades into the background until dropping down into a soulful female vocal.

Regular readers know how I feel about songs over ten minutes...I'm not crazy about them. It's not a totally deal breaker, though most bands these days drone on a blast beat for the first 8 minutes, so it is really going to depend on what they do with the next 15 mins. I can say a 15 min song will never make it over to my iPod. The first five minutes does find them shifting into a more pounding half time riff. When the song takes a more dramatic shift at the 7 :30 mark, it's not the smoothest transition as hanging on distorted synth is kinda awkward. But I have heard Agalloch do similar, so I will try to let it slide. At the ten minute mark, another five minutes is not making sense to me. Behold the end just kinda breezes past me and sounds like its par for the course when it comes to post-modern black metal or however we are choosing to label it. I will give the album an 8 because despite this over the top end that never reached it's potential I think the first song is incredible and the album is strong up until the last song.