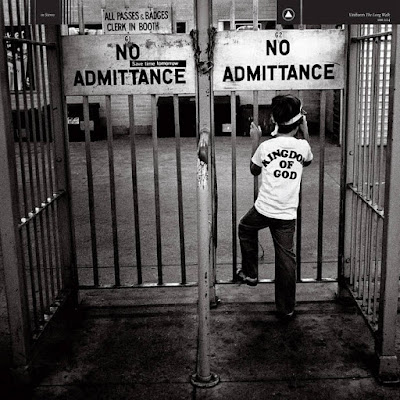 This project out of New York has a lot going for them in the fact they have added Liturgy drummer Greg Fox. They opener up their new album with a great deal of sonic power and intensity. By the second song it's still pretty clear that this is going to be one of their heaviest offerings yet and Fox's drumming is only adding to that. There is more of a punk feel to "Inhuman Condition" , most of this is due to the yelled vocal. By the time we get to "Found" which opens with a mother fucking mean ass riff, it's obvious this is going to be the band's most metallic offering yet. However it's by the point that you also realize these vocals are just obnoxious as hell. If vocals are something you tune out anyway when you are head banging then this might not bother you as much. The blown out riffs get so rumbling they almost make me over look this fact as well. Almost.

Purposefully lo-fi and ringing with feedback, they relent very little on "Transubstantiation" until they drop out and it becomes ranting over the pulse of a bass frequency. When they kick back in, despite the vocal annoyance it's undeniable its powerful. Its hard to tell where punk begins and industrial strength sludge ends. "Alone In the Dark' keeps the momentum going, but the fact the vocals are little more than the same indiscriminate yelling, makes it begin to lose some of the luster. The riff to "Headless Eyes" compensates for any and all finesse that the vocals lack. The double bass on this song steamrolls everything else. This is the only way they can make things really work with the vocal handicap. When they do not have the benefit of this kind of riff , then on a song like "Anointing  of the Sick", where the vocal ranting is even more tedious it becomes unnerving. Half way into this song I am thinking "God, is this over yet".

The album ends with "Peaceable Kingdom".  They slow down and there just doesn't feel like there is enough direction for them to let up on the more relentless side of their sound.Despite the terrible vocals and the last song that lacks direction, I'll give this album an 8, on the merit of how well it works despite some of these factors that play against it. If you are a fan of these guy and tone deaf enough to ignore the vocals then this will blow you away. It feels like this is for punk with an appreciation metal rather than a metal album though it is heavy.