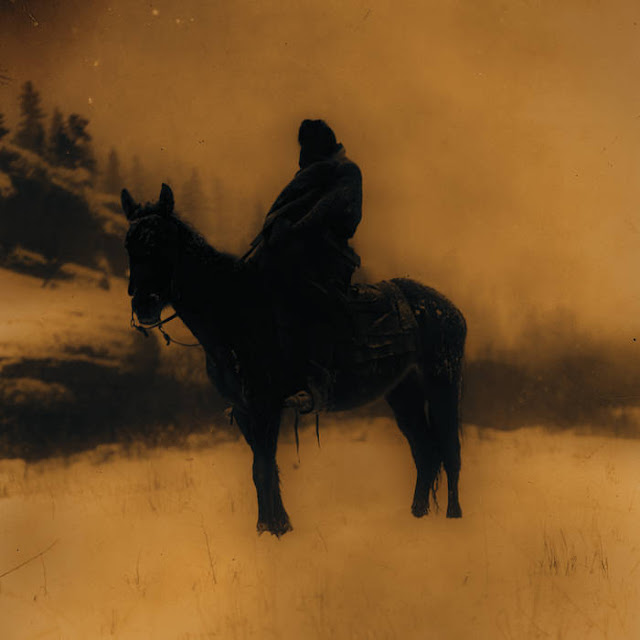 I like the fact this Colorado based black metal band doesn't start their album off with blast beats. Some do show up a minute and a half into things, but that is more variation than most of the black metal sitting in my in-box. Three minutes in it slows to a darker more melodic section that has a slight western feel. The 13 minute "On Horseback They Carried Thunder" is more metallic in it's intent , but otherwise sonically in the same range as the first song. The only difference is much like the title suggests the guitars take on more of a gallop.Unlike the first song this is also more typical black metal. In the final moments of this epic they twist in more atmosphere.

"the Crows Ahead Cry War" opens with reverb tinged guitar stirring a storm over the old west. It builds more like something Neurosis used to do  when they were a metal band. The dynamics allow the song to simmer rather than pummel you. The vocals are lower throaty growl. It gets even more melodic in the last two minutes of the song, finding this band continuing to expand the range of  color they use. "the Dreaming Plain" stays at a mid-paced throb. The vocals go up into more of a croak. They use double bass to build it up in almost a more Enslaved like manner. This picks the pace up and keeps the song moving. It evolves from the original pulse building from their rather than a shift in riffs altogether. Their are some stronger accents employed and dynamic shifts into more melodic realms.

The album ends with the almost country strum of "A Nation of Immigrants". Clean vocals appear, there are a hollow mournful chant as much as they are sung. The song has a hypnotic drone. While I like where they are going, they never seem to get there as the song stays on this drone. I'll round this album up to a 9.5 as it brings fresh sounds to the table, while it might not be the most Cvlt take on black metal its a great album that is both dark and melodic in the face of dense heaviness.