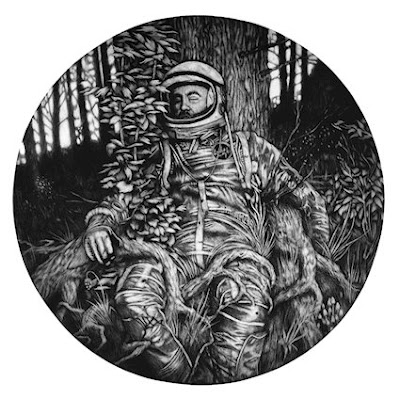 This band from Norway is a weird mix of Brit flavored 60s rock and indie rock , but they are not afraid to crank up the distortion. Since they are from Norway their press release tries to connect them to black metal , but I am not hearing how those dots could connect. This is their second album and it offers a pretty wide range of sounds and moods. More synths color "Taste of Blood". I like the dark and drug lidded slur of the guitars and vocals.If something sounds like it is being played people musicians on drugs for others musicians doing them it wins in my book. If the Flaming Lips were darker they might sound similar. There is a mix of Brit Pop and post -punk on "Brainmelt" which is more upbeat.

The fuzzed guitar of "I can play myself" begins to find a more uniform punk meets T- Rex sound.If it wasn't for the gleaming drugged sheen causing the sound to stagger this might be too happy for me. "Gout Lord " continues down the more punk path they hinted at earlier in the album. The vocals are not really screamed, more drunkenly muttered with resent. I like their more drugged indie rock side better than the punk one , it's just more interesting and doesn't sound like every hipster garage rock band. They head back in that direction with " Did you do it again" . The dreamy glaze is cast back over things.

"We'll make up your mind" has some jagged rock edges. Kinda 70s glam influenced. I guess what they are going to try to call black metal is the more Motorhead like vocal on "Funeral Fist" . While it's not a terrible song its still more punk than metal. The last song "Levitation" has a almost folk jangle to it. The trippy elements are still in check they just are not using them as well as they did earlier in the album though even then it doesn't suck .Very Syd Barrett influenced. I'll give this album an 8, it starts off stronger than it ends . I think these guys have potential to do some great things, I like the bulk of the sounds, I think some of the punk parts are not true to what they do best or maybe its the sound of them growing away from that kind of thing.