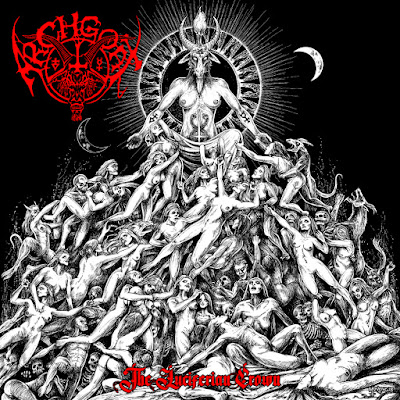 The 4th album from the Finnish metal mongers, finds them sticking firmly in the ghastly brand of death metal that has marked previous releases. Their attitude and passion for the Left Hand Path, gives them more of a black metal feel. The guitar solos are more nuanced than the riffs of some songs. There is always a clarity to what they are doing, so it never comes across like they are just hitting you with a dense wall of blast beats.Though blast beats do come on "the Messiah Of Pigs" which is handled in a way that reminds me of old Cannibal Corpse.  The low gurgled vocal are perhaps even more on the one dimensional side than Chris Barnes. There is more of a thrash tinged groove to the riff of " the Darkness Has Returned, It has almost a more punk feel in the way they frantically lash out. This gives the song more of a thrashy feel, despite the low growl.

"Sorcery and Doom" blasts in with a gritty explosive style of in your face death that disregards finesse. Midway into the song that regroup to find more of a double bass groove, before speeding back up. They ebb back and forth form this use of dynamics. The second slightly different to create more of a moshy feel like the death metal of the late 80s. There is a little taste of ominous atmosphere at the beginning of they hyper blast speed fest that is "Star of Darkness" . The synths that sit low in the mix add some texture, but truth be told this album could certainly use more sonic colors. It get it's intense and heavy, but the breakdown like turn the song takes midway in proves to have a darker result. When things slow down for "the Obsidian Flame" it opens the door for some musical depth. The synths make more sense. It might be the best song so far.

The speed back up for the title track. It's very much about the blunt force trauma of jamming its speed into your face. This also makes the song one dimensional. The album closes with "I am Lucifer's Temple". The more mid pace throb of the song, helps to set it apart from what has more often than not been a lust for death metal speed. A minute and a half in it drops down to just the bass, then builds back into the pulse of  their march.I will round this down to a 7.5, while it's better than many bands doing similar, I preferred the previous album as this one relies too much on speed. Granted if you like fast death metal that asks few questions the round this up to an 8. Regular reader will know my tastes lean more toward black metal as it offers more emotional color than is presented here.