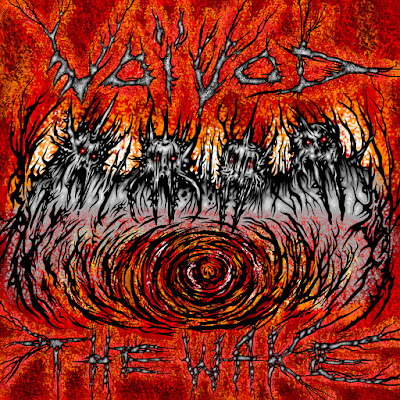 Ever since 1988 I have been a fan of this band.  I have followed their journey from thrash to prog to weird Pink Floydian places. The 14th album from these legends finds them embracing all of their sides. The opener takes you through a wide array of dark and melodic places, with Nothing Face" like drive rather than thrash aggression. Snake's voice sounds great. Their is a more angular stomp to "the End of Dormancy". Weird effect on his voice create an interesting narrative. I love when it gets darker with the more subdued vocal. Snake is really stealing the show here. Older and wiser I can hear more Killing Joke in their approach. "Dimension Hatross" is dark in a very dystopian manner, where this album is darker in a more introspective manner. There are still many injection of progressive rock woven in. It's not as heavy as "Killing Technology" but why would it be?


There is a more upbeat mood to " Orb Confusion". It still sounds very Voivod. Away's drumming is also very consistent with what has made these guys who they are. The new kids Chewy and Rocky, get what Voivod does and conform to that vision. The riffs are still angular and dissonant. There is maybe a little more shred in the guitar solos. "Iconspiracy" finds a weird even for these guys symphonic element creeping in. Fans of progressive metal will really appreciate this one. "Spherical Perspective" is more melodic and mid-tempo. It finds Snake going into his more gritty vocal roar. They continue down more of this middle road for the marginally more frantic math of "Event Horizon". "Always Moving" starts off with more of punk beat, but falls into something very surreal, which is the kind of unexpected dynamics I love to get from these guys. In converges into a rather tension and ominous chug.

The album closes with the 12 minute "Sonic Mycelium". It starts off with a languid psychedelic tone. Five minutes in things get weird when it takes on a more circus tone, before flexing into a burly bark. The acid continues to find them peaking as they come out of this part and into a more angular that Rocky really does well at . If you are going to do a 12 minute song then you have to make it as interesting with as many twists and turns as these guys do. It ends with strings which are the one thing on this album that is going to take some getting used to. I'll round this album up to a 9.5 and see how it sits with me. I think while it's not the very peak of the Piggy years , still holds ground against their body of work as a whole.