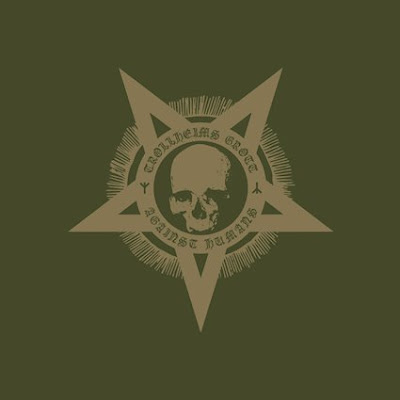 This band from Finland supposedly plays industrial black metal according to their press release. The first song sounds more along the lines of Behemoth. This is not a bad things as there is some groove and the riffs are catchier than if it was just a bunch of blasting. Even the big march of "Deathless  Form" shows they don't have a clear understanding what it means to be industrial, so I am no longer going to listen for that. The vocals are the only monotonous  element to their sound. While it's rasp might not be like the croak Immortal uses, it could stand to be more expressive. More blasting develops on "Omega Angel". This is their first album in 15 years, so to their credit they are cranking out the kind of black metal that still feels relevant today. This doesn't mean it's always the most original. The effects layered over the vocals do provide an interesting effect, they just need more of it.

"Holy Black Sun" has the keyboards more pronounced and captures a different feel. Not industrial , but more sci-fi tinged.  "Twilight" is darker , but not interesting enough to merit being an instrumental. The Behemoth comparison's could be more noticed on "LFXR" Here the vocals take more of shout than the static growl they held earlier. "The Earth's Last Stand" is pretty run of the mill for metal of this kind and finds the band really failing to establish their own identity as it could be any of a 100 bands.

I'll give this album a 7.5 They are not really breaking any new ground, however they are good at what they do . The first half of the album is catchy and well written. Sure their musical ability is on par. The pull off all the guitar solos, blast beats and double bass sections that is expected of this kind of metal. But that is just it. Any band whose album's I'm listening to at this point needs to do more than just pull it off well, you can throw together any group of actual musicians and they can do that I want to hear the sound created that is the signature of their chemistry and what makes them the band they are, that might not have aged like the fine wine the 15 year hiatus should bring. But if you can't wait for the new Behemoth this will make for a good supplement. .