Void of Silence : "the Sky Over" 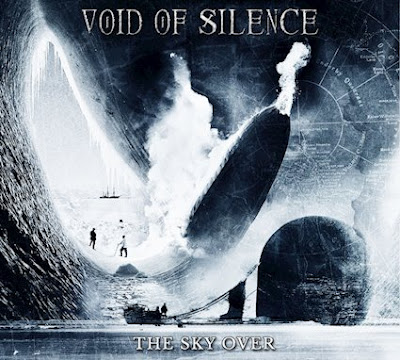 It's been 8 years since this band's last album and it opens with a 16 minute song that could have easily been a 11 minute song. I'm a conundrum as I love doom, but have grown weary of 15 minute songs. When this song gets to the meat of the matter it's great, with mournful crooned vocals. Luca Soi is on the mic this time around. He gives it almost a Primordial feel, which will please fans who like the album  Alan Averill sang on. The synths are thick and almost threaten to over power the guitars. There are song interlude the length of normal songs, but all of the album's actual songs are sprawling 15 minute plus epics.

The title track doesn't' grab me like the opener even though it works off all the same things that made the opener rock. The guitar solo might be marginally more indulgent and gives the song a little more of a jammy quality. I think the vocal melody wanders a little the more I listen to it. Though the ambiance is pretty thick on this one leaving some wide cracks for the vocals to fall into. It feels more like background music than metal which should grab you by the throat.I like the guitar solos that open "Farthest Shores" , but I do think some of the fat could have been trimmed. In fact the first five minutes , which would have brought this down to an 11 minute song. The vocals are stronger here. I like how in the last couple of minutes the song takes a darker turn.The album ends with an atmospheric instrumental tinged with faint traces of female vocals in the background.

Due to the song lengths and consuming atmosphere, I don't see this album as something to have in my iPod for a trip to the gym. It is however a great album that I have enjoyed listening to. Almost cinematic in it's scope.I'll give it a 9 and strongly recommend it to fans of doom that is lush and layered with old school metal melodic qualities.

Email ThisBlogThis!Share to TwitterShare to FacebookShare to Pinterest
Labels: "the Sky Over", 9, album review, doom, Void of Silence