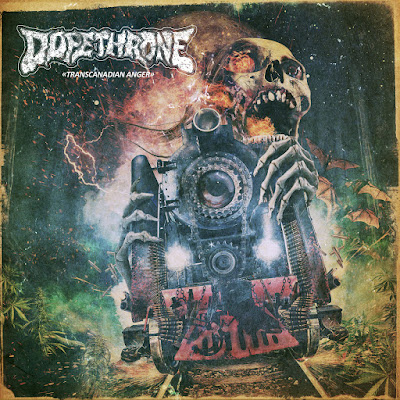 This Canadian band has unleashed it's 5th album of bong fueled doom. I have been sitting on this one while letting the manner in which the band  crosses over from stoner metal into doom with the ominous darkness  soak in with a few listens. While they are good at what they do , as soon as two songs in what they do can take on a more uniform sound. Some of this is due to the fact that the rasped vocals are pretty much a one trick pony. When they use things like samples to add another dimension it works best for them. They need as many different layers of sounds to keep things different enough. The charge into a more muscular bulldozing with "Killdozer" living up to the name. This puts them closer into being sludge. It's almost like an over-driven black metal  version Motorhead covering Black Sabbath. When they slow down for "Scuzgasm" then it's getting redundant.

They tend to do better when picking the pace up into more of the sludged out jamming. The vocals sneer with a rasp from behind the wall of guitar rolling at you. The lyrics to this one however are easier to make out. It does slow into more of a lurch and lumber, but this works better dynamically than other attempts. "Snort Dagger " is back to the slower more doom flavored heaviness, that comes across murkier here. It drags as intended, but doesn't feel that it works off what they do best as effectively. Next is a cover of  ZZ-Top's "Kush" which they have re-titled "Killbilly Kush". This adapts well to their style.

They close the album with well balanced blend of doom and sludge for "Miserbilist". This one has more stomp in it's chug.I don't think these guys are as mean and nasty as Fistula, though with their use of samples they are heading in a similar direction. I'll around this up to a 7.5, it's not the most original thing I have heard, and the vocals are a one trick pony , but they are very good at what they do..