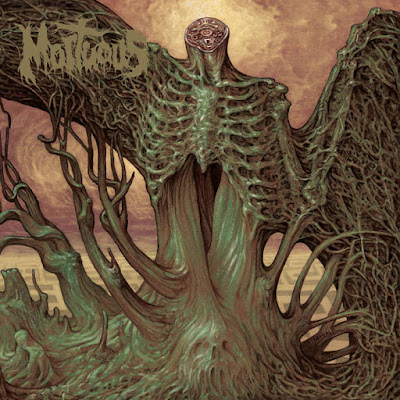 By definition this could be called a death metal super group, as it features members of Exhumed, Repulsion and Necrot. Into the first song I can tell what I like about these guys is the dark quality that finds classic sounding death metal , met with melody . It also feels like these guys give a shit about writing at song and are not just throwing me into a wall of double bass. It reminds me a little of classic Obituary, though darker and denser. Rather than John Tardy's expressive monster belch of a growl, this is lower and more guttural of a vocal approach. The guitar solo's have that Slayer like chaos to them. "Chrysalis of Sorrow" is more like death doom with it's mournfully deliberate pacing that is interspersed with double bass drive section edging up the aggression. Three songs in and I am already thinking this might be one of the best death metal albums I've heard in the first 6 months of 2018, so lets see if they can keep it up.

I might have spoken to soon as "Dead Yet Dream" comes at you with a slower gurgle, that is not as engaging as the first three songs. The doom elements work better in the ominous "Anguish & Insanity" . It speeds up into more of a death metal pace. Midway into the song it hits a cool My Dying Bride like part, though less melodramatic. The vocals do take on a more maniacal Obituary like tone. The title track finds them slowing down on the verses to create the stomp of a needed groove. While they can play at that more Morbid Angel like pace , I think it's the moments where they show restraint that are more unique to who they are . "Prisoner Unto Past" races off into a more typical break neck death metal pace. It then locks into a more grooving double bass section of what I am guessing is the verses, it's marginally more murky in the structure department.The layered shift of the guitar tone also helps set this song apart. I don't think they should have returned to the opening pace at the end, but it's not a deal breaker.

They throw the more Cannibal Corpse speed at you to end things with "Screaming Headless". Thankfully that only lasts for the first time, as it would have been tedious. The stiff drum beat to that kind of death metal is not my favorite. It does switch up into a more moody ending.  I'll round this up to an 8.5 as it sometimes plays to safely with the death metal conventions. These guys are just slower death metal with a range of emotion that sometimes extends past rage. That is more than can be for half the so-called brutal death metal bands.This comes out June 22 on Tank Crimes.