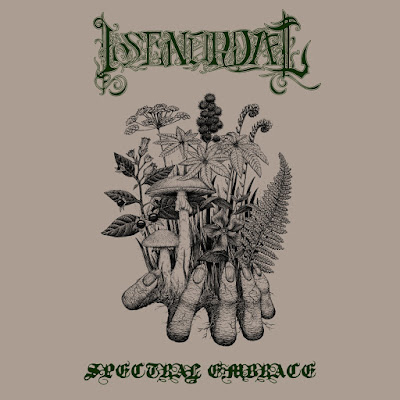 This Seattle band's "Shores of Mourning" album earned a 9, so the bar is high. They start off with their more neo-folk side taking the lead. The vocals are soft and the strings holds most of the melancholy. The female vocals join in to add harmonies.It's hazy but not dark. There is a droning quality to it that does have a mesmerizing appeal. It's not until the second song that harsh growled vocals come in over the gentle plucking of the folk that unfolds. The 3rd song transpires in a very similar manner to the first two. The first two songs worked for what they were, but now I am waiting for some kind of dynamic shift, otherwise this is going to feel like the background music at a New Age bookstore. The vocals work well and I get that the hypnosis of drone is what they are going for. If they want to go straight neo-folk they are succeeding. Four minutes in the folk does get more aggressive. The harsh vocals return again and things do get marginally darker.

"An Entrancing Dream" begins with a more ballad like tone. The vocals are very subdued. Now we are back to being new age hippies. So it's safe to say I could stand for this album to be darker. In the last minute and a half the harsher vocals return from behind a wall of distant reverb. Too little too late. "Dissolution Into the Earth" might be slow, but it is not doom, so do not let anyone try to fool you into thinking different. Not that I need them to be doom, I'll settle with darker folk. The vocals stay hushed on this song as well which begins to create a more uniform sound. The harsh vocal come in sooner to counter balance the female vocals, though the over feel of the music remains the same shade of gray. The song breaks into a more energetic strum and percussion enters. This is enough of a dynamic shift to make it work for me. The melody to the last song was song pleasing to the ears and one of the more interesting bits of vocal interplay on the album, but the accompaniment did not stand out and made the song fade into something that was ok, not great or breathtaking.

Overall, this album crosses over into full submersing themselves into neo-folk. Not as dark or heavy ass the previous album, I'll give this a 7.5. If you were always more of a fan of this band's folk side and don't need them to be heavy, then this change won't phase you.