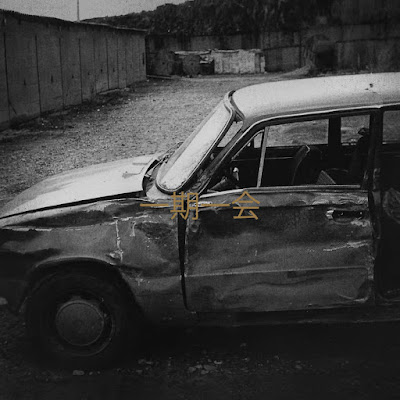 I
n the first minute and a half the first song has already shifted from varied levels of prog, most of which bearing a dark dreamy narcotic drips that even coats the blast beats they launch into while the dark hole they sound like they are playing in front of attempts to swallow them.In other words if Twin Peaks was going to have a black metal band playing these guys would be it. "If Return a Mirror Glance" starts with a weird dissonance mathy prog craze before settling into more of a groove. There is more of a metal feel to "Never Through a Threshold" which is does engage their odd angular side, but has more than enough blast beats to resonate as black metal if that is how you wish to identify these guys. It also doesn't have as distinct of a personality as the first two songs.

By the time I get to "No Premature Celebrations" I have begun  to wonder what the point of the screamed vocals are . They don't really go with anything and sometimes seem to be the only link to metal going on at the moment. Midway into this song it smooths out into a really nice dark section. The vocals here do have  marginally more form and function. These guys pretty much shut down the argument that black metal songs need to be over 10 minutes long as they cram a lot into five or six minutes easy. "Never Ailments Oneself" is one of the album's most melodic songs and has some interesting percussion along with great guitar playing.

"No Clinking of Glasses" finds the vocals changing. The remind me a little more of Today is the Day here. This song is more like free form jazz with angry bouts of metal thrown in. When it does go down more of a metal hole it's in brief bursts. I'll give this album an 8.5. It's strength is the original vision this band has, it's weakness is the vocals are more often than not an after thought and the production is too murky.If you are into progressive black metal then it's worth your time.