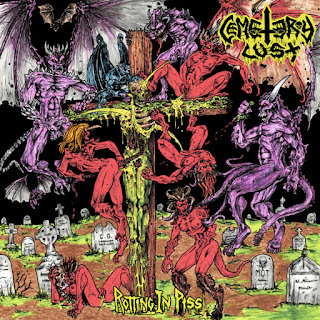 If you put Venom, Possessed and early Slayer in a blender the results would be this band. Those are all bands I liked a lot in high school. The energy they recapture certainly carries the first song. Then the second song relies on the moshier riff to keep my attention, leaving me a little worried as to how bored I might become midway into the album. "Fatal Infestion" proves my prediction right. It's too straight forward. The barked snarl of the vocals repetitious. More love should have been given to the drums in the studio as they are what made or broke these bands back in the day. I can here where today's metal millennials might be fooled by this, but I grew up during this time so remember when this kind of music first hit. It was exciting then. Here it's like reheating left overs.

By "Bowels of Blasphemy" it's all starting to run together to me. The vocal patterns all to similar. They remain in a nasty sneered narrative. The rule here is cool riffs alone do not a good song make. For your average thrash band who doesn't have the writing talents of Exodus or Testament this can be daunting. Thrash lived or died by the riffs. They vocals lower into a death metal growl on " Hideous Nature" which is about the extent of the dynamic shift this album carries as it generally sticks to the same speed through out. There is more of punchy Slayer feel to " Witches Seduction". I guess punk rock kids looking to get into metal might dig this. But it's a reminder to me why I prefer doom and black metal to thrash and death metal. It is a shame because those early thrash metal albums are what gave me a taste for heavier metal.

I'll give this album a 5.5. It doesn't suck, but it's so redundant it fades into the background. Thrash should hit you , have sharp enough hook to grab your attention and keep you coming back for more. If you are too young to know better then I would suggest checking out albums like "Show No Mercy" and "Seven Churches". This album comes out July 20th.