Orange Goblin : "the Wolf Bites Back" 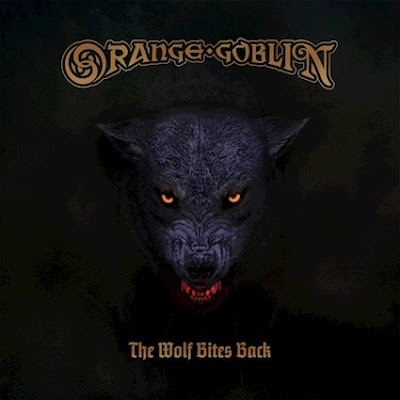 Sure this band has been around for decades. They are stoner metal royalty. However you are only as good as your last album, so do they live up to their legend. At first it seems like they might as the band busts into the album with authority though, they come across as one trick pony on "the Wolf Fight Backs" locking into an aggressive boogie that carries over into "Renegade" that continues to exploit the latent Motorhead influence. Stoner and doom are two labels that get used together with out thinking what the latter means. The cross roads where these two intersect is felt on "Swords of Fire". It's jerked out of this question midway into the song as the pace becomes more driving. It also becomes more apparent how much these guys influenced High on Fire.

"Ghosts of the Primitives" has a ZZ -Top like blues groove to it that helps to break thing up. "Suicide Division" is a more driving punk. It's angry but also a little too straightforward in it's bluster for me. I prefer the bluesy tone of  "the Stranger".That finds there singer in a lower register that shifts away from his normal bark to provide a more melodic diversion. When it speeds up, it works better than the "one, two , three ...go !" style punk explosion. The lyrics are about a serial killer and tell a better story than most of the metal-phors they use. "Burn the Ships" also benefits from them ebbing down to a darker and more melodic groove. There playing is seasoned , but none of it really stands out as going above and beyond the call of duty. They do serve the songs and no one shows off.

"Zeitgeist" closes the album. Moodier and more melodic until the throaty vocals come in. It holds traces of Thin Lizzy. There is a little more re-verb applied to the vocals when they go into the more chorus. I'll give this album a 7.5. It's respectable and succeeds in doing what they set out to accomplished which should please fans of the bands.It's a little too straight forward for me. Meaning not dark or weird enough to sit alongside what I normally listen to so if you are fan of this kind of thing you might even round it up to an 8. This album comes out June 15th on Candlelight Records.