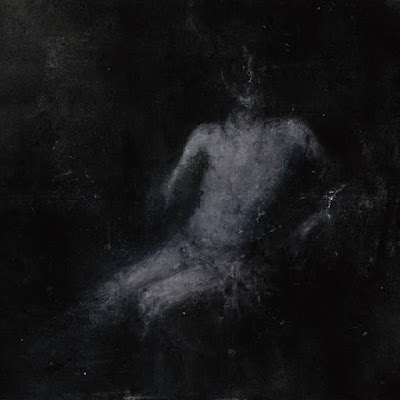 I liked this French band's 2015 album, here the songs are more long winded and the feed back is more in your face than I remember, but it's been three years since I listened to that album. The initial crunch and roar gives this more of a sludge feel than doom. It's dirtier than doom. The rumble is more machine like and anger is the only feeling I am picking up from them. The first song works of the same plane of anguish and is not as moody as I remember them being. They tap a little further into a wider range of colors and feelings on the second song. I runs of a droning bass line with the gurgled growl of the vocals following. The build is slow on this one and it's dismal enough to cross over into doom. All four of the song's on this album are over twelve minutes and I can certainly hear where some of the fat could stand to be cut.

The third song descended into a  slow sludge pounding. It has a ton of weight to it , but not much in the way of dynamics. Apocalyptic in the density of the feed back. Eight minutes in and the song kind of wanders of. The snarled vocals go into more of a manic chant.  Twelve Minutes in the song descends into chaos. They close the album with a powerful pound that makes me reflect on a conversation I had with my friend Eyal who was making fun of the fact that bands always say "this is going to be our heaviest and most brutal album yet". Cult of Occult makes good on this promise, but in the end is that the best case scenario when it comes to being a listener?  It depends on what you want from music. At the last Fetish convention I attended there was a phrase that stuck with me "Don't yuck on someone else's yum" So you might be a sonic masochist. If you want punishment it is here.

Since this blog is not about punishment, but about songs the rule here of "Cool riffs alone do not a good song make" weighs heavily against the heavy here. When I let over six minutes pass of continues pounding drone, no variance in the growl of the vocals I am going to get bored. So the badge of honor going to heaviest thud, is really an empty victory to my ears. I'll give this album a 7.5 because it does accomplish what it set out to do and they are good at what they do , I think the last album offered a little wider color scheme.