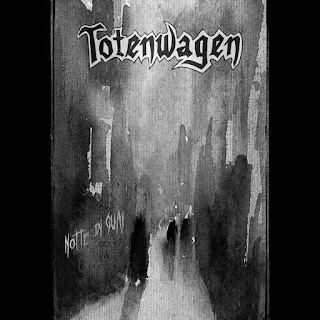 I immediately do not the vocals to the first song off this Italian band's new album. There are some dark moments, almost a Frankenstein like lumber that sounds ready for Halloween. But I am not sure if that makes this death rock. I has a black n roll feel in the sense that there is roughened brawn that blitzes through the bark off these songs. The vocals continue your their deal breaking bark. On the first song I told myself, rather than waste time hunting for something else to review I could let this album play and casually write in spurts as I wen since there is other stuff I could be working on. The vocals go in a more punk direction a few songs in for "Spit and Run".  This is an improvement as the music had up until this point been much better than the vocals which were dragging it down.

You have to be careful what you hope for as once this happens the music all begins to sound the same. The only thing that really breaks this up is a weird almost medieval flavor to the interlude that comes in the middle of the album. It breaks things up for them to go back to a more punk influence frolic. There is another melodic folk metal feel that pops up against the gang vocals. So it's not like these guys are purely another gutter punk band dressed darkly enough for Halloween. The keyboards are what really draws the line in the sand with this and sometimes makes me think of Murder City Devils, who were also dark like this.

The more nuanced runs going through some of the riffs have echoes of Iron Maiden's first two albums. At the end of the day punk wins out. I'll give this album a 6.5, which is dramatically higher than what I might have imagined going into it as I was unsure I could make it through since I hate the vocals, but they switch those up enough for me to be able to make it through and here some unique things they add to their take on punk.