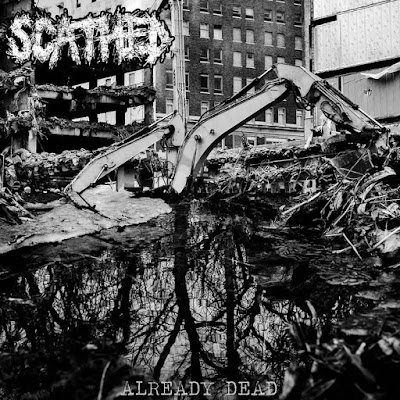 So I need this guys to calm down and give me more songs like "Ticks" as the first two songs not only run together, but are and angry blur with some cool riffs tossed in to break things up. The rule around here is cool riffs alone do not make a good song, so that doesn't play into their favor I guess I was hoping for more from the crust side of the equation, than the hard core. I haven't really gotten to review a hell of a lot of hard core this year, not for lack of trying, but haven't found that much. The title track finds them heeding my advice as it opens with a darker slower melodic section. They are half way into the song before they race off on their punk temper tantrum. This is fine because we have now established what we like to call dynamics.

"Despondent Cries" doesn't have the benefit of dynamics to work off of and is instead and explosion of feral barking with blasting hard core propelling it. Kind of a one sided fight. In the last minute it does drop into clean guitar as an outro, but that is a too little too late. However this carries over into the instrumental after this and they strum out the chords. This seems like more of an interlude than an actual song. I do like how they bust into "Facades". So if you were thinking "This fucking guy is always wanting for things to be melodic and complains when they get heavy." this is where heavy works best for what these guys are doing as we are getting some sonic variations. The vocals prove to be  one trick pony, but the music compensates.

"Sleight of Hand" kinda bores me by being too straight forward and pretty much a form of hardcore I have heard a hundred times and then some. Then they give more of the same with a marginally more melodic guitar riff.I do like when the bass takes of the over and that inspired me to round this band's score up to a 6.5. Not what I showed up for , but it's what they do. If you like dark metallic hardcore then give it a spin.