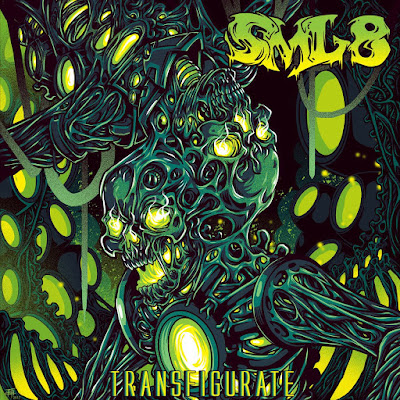 Just stumbled into the new one from this odd industrial band. I like these guys are really dark. There are some odd touches like when the vocals are not sounding like a possessed cyborg they sound more like a steam punk pirate. I was surprised by the guitar solo that erupts in this song. 3/4's into the song more organic elements begin to reveal themselves including the fact there is a real drummer on board. "Vulture" finds the cyber punk soundtrack given more groove as the samples of terrified women scream out. Female vocals grace this song. Things continue to get more metallic on "Tic Toc", the spiral of pyrotechnic guitars makes this a little over indulgent. "Digital Demise" focuses more on the percussive elements of their sound with the guitar giving things more breathing room. The over driven vocals have a more robotic sound to them. The female vocals also return on this song.The break donw should not surprise me , but I was expecting it to stay more along industrial lines.

There is more of the industrial thrash to "Redrawing the Lines" . It slows into a creepier section before building back up almost like nu-metal. Things slow down and get darker for the melodic "Falling Further" that features actual sung vocals. It has a more brooding pulse that you find your self waiting to erupt into the more metallic explosion the album has hit you with thus far. They find themselves capable of using restraint. The female vocals lead into the verse of "Void" before the screamed male vocal trades off. There is a Marilyn Manson spookiness to "Solace in Solitude" though you can here traces of how Skinny Puppy might also be one of their long lost influences in how some of the vocals are produced.

There is more  of a Disturbed like groove to the guitar riff that opens "Scathed" but the verse descends in a nightmarish robo-gargoyle gurgle. The guitar solos kind of come out of no where even though it's not the first on this album, I forgot that it was part of their thing. "Sound Salvation" has a darker groove that I like , however I don't think the vocals work with it as well as they could in the verse, though the songs shift in a way that if one part doesn't connect as soundly it's ok because it's going to turn into something else soon. It ends with a instrumental that sounds like it should be playing during a Final Fantasy commercial. Overall this album is pretty solid, I'll have to give it time to see how it grows on me, I'll give it an 8.5.