Self Defense Family : "Have You Considered Punk Music" 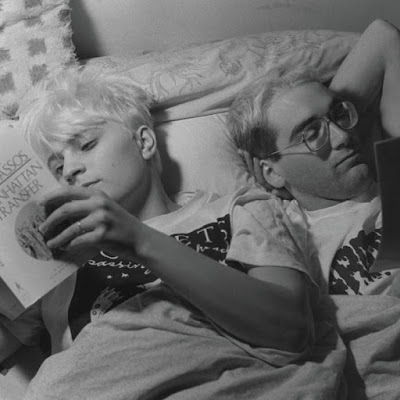 I like these guys a lot and know despite the title I should not expect them to actually consider playing punk music , though it would be interesting if they did. There is a Bright Eyes sense of sentimentality to the brand of introspective indie rock they are jangling though here. "Certainty of Paradise" is a few bpms more upbeat , but clangs in a way that is not as sure of itself as the first song. There is a little more pronounced King Missile vibe to "No Analog or Precedent". The trumpet in this song is a nice touch and there is more of a dynamic tension that builds on this song as well. I had to go back and give "Watcher at the Well" a second listen for it to sink in. It has an odd narrative, set against the atmosphere.

"Nobody Who Matters Cares" is yet another song where the guitar is interesting , but the vocals sound like they are being sung by someone distracted by the fact they forgot to take their meds. There is a slight country twang to it. The title track finds the vocals even at a more subdued murmur that borders on a breathy whisper. There is a gray slo-core feeling to the lingering drag of the guitar. The song hovers where it starts so not much in the way of dynamics. "Have You Considered Anything Else" works off a slow drone like some kind of narcotic folk music, the vocals do build a little from the more hushed place they start from. There us a more post- rock feel underlying "Raw Contempt" . The drums do a better job of keeping things moving, so the moody hesitation of the vocals has less of the song's weight upon them and this formula works much better for them. There is less function and form to "Slavish Devotion to Form" that follows this. The vocals feel more like spoken word. Things get darker for "the Right Kind of Adult". The drums feel more like Joy Division, though the synths and pianos that comprise most of the song focus more on ambiance. While the band thinks that this is their best album yet, well of course they are going to say that, I think it's much less focused and not as vocally interesting as "Colicky", so I will round it down to an 8. Still better than a great deal of bands. I don't normally listen to a ton of indie rock, so it's a nice break and when I do listen to indie rock I want to hear melancholy stuff like this, but I am sure if you are a regular reader it's no surprise as I have covered this band before.