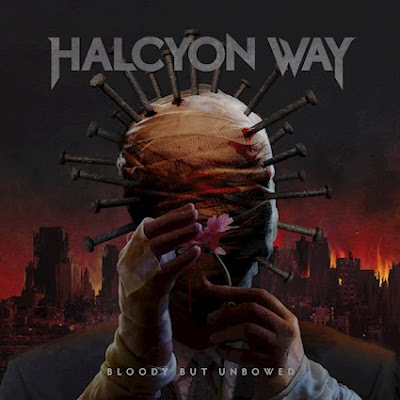 In 2018 how does one do progressive metal. By progressive metal we are talking about the branch that stems from it's last know source  with bands like Queensryche and Fates Warning, not djent or Mastodon. There is less relevance in bands like Kamelot and Symphony X, who these guys have obviously looked to for inspiration. The big yodeled chorus of the title track, seems like the 90s answer to that question. They are going for a more aggressive take on this with growled backing vocals and guitars harmonizing rather than synths. There are some wanky guitar solos. These guys have been at it for 17 years, so despite line up changes they have a solid idea of who they are and how they want to do this. The big biting guitar sound that would not be out of place on a more melodic grooving death metal album, gives their sound the extra muscle needed to compensate for the vocals.

By the time we are at "Blame" they seem to have played the bulk of the cards in their hand. When they return to the well to try these tricks again it's less effective with me. The almost power metal like vocals , are too happy for me and the problem with many of the bands in this genre is they begin to sound like a pumped up version of Journey. There do some production tricks on this song that almost give them a more Disturbed like feel, which is not a compliment. "Slaves to Silicon" finds them adding some electronic touches to the bells and whistles , which work fairly well give a wider range of color. The vocals on the verse have more of a Kamelot feel. The chorus to this one makes me think of Daath's "Dead on the Dance Floor". The death metal snarls continue to accent things around the more muscular Journey vocals. Even on a song like "Superpredator" which is supposed to be heavier, the vocal's have an almost cock element to them that dulls the song's sting.

"Primal Scream" finds the pace picking up. The vocals don't do much to compliment this. In this way it sounds like the singer from Steel Panther jamming with a groove oriented death metal band. By "Ten Thousand Ways" the cock rock factor is beginning to wear on me and it's not like the melodies are strong enough to justify this. Groove remains in the heart with a kinda of  Myspace era thrashing that comes close to Bullet For Valentine in it's best intention. Most of those Myspace metal bands were heavier hair metal so it's like these guys just kept doing what they had been doing until it came around full circle.  Self awareness goes a long way, while they are trying their best to be heavier how can they not hear that the layered harmonized vocals are going against this heaviness they are trying to achieve.

There is more of a Killswitch Engage to the riff of "Cast of Another Stone". The lyrics continue to be pretty stupid  here, reaching a new low on this one. The breakdown on the verses not doing them any favors though there are some accents that work well so it's hit or miss measure by measure. There are windows of opportunity for every bandwagon that rolls through and I think it's clear if this had come out at their formation a bigger label would have been willing to pick this album up. Not that record labels make or break a band these days, you just can't help feel this is going to fade into obscurity. Harsher vocals continue to haunt the corners of the song , while the more cheese laden vocals are the obvious focal point. to the point they make "Crowned In Violence" hard to listen to. "Burning Summit" fades into the formula with nothing that makes it stand out from the rest. Production wise is where this album excels and brings it to a Five Finger Punch level...if that's something to be proud of? While this album might be the sound of a tree falling in the woods, I am surprised that it was not loaded with the kind of power ballads that were once this bands stock and trade and they are making a concerted effort to get heavier now if they could do something about those vocals . I'l give this a 7. It comes out on Agonia Records August 3rd.