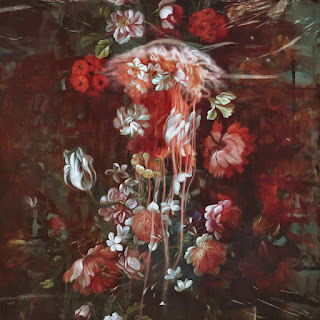 This Canadian project is under the impression that metal bands do not talk about romantic love so this is the topic of the new album. I am not sure what rock they have been living under as Iron Maiden, Judas Priest, King Diamond, Megadeth, Slayer and more all have songs about it. This black gaze act might not have the most knowledge of music but they do step away from being just Deafheaven clones and since Deafheaven is no longer going to sound like themselves their throne is ripe for the taking. The first song uses more complex patterns and symphonic synths to separate themselves from the pack which I can appreciate. I think the second song does more dynamically which I appreciate even more,
They go little overboard with the 5 minute ambient interlude. By they this is the sole work of a dude who refers to himself as a symbol.  The symphonic synths  drown out the guitar going into "Funeral Pyre" , until it breaks down into more post rock guitar and piano. The harsh vocals are mixed way back behind the drums and a more of a texture. I doubt there are any actual lyrics. If you crank this album louder you can hear them better, but they are not a focal point of the songs.  "Cherish" is a piano interlude that would have been better served worked into an actual song.
The drums wrestle with all the synths and pianos on the title track while the vocals roar in the distance and the guitars buzz around idlily The production is this album's worst enemy. There are some decent idea's that are well played but in collision with one another.. When it comes to songwriting they are certainly trying as hard as they can with this given idea. All if found has a great guitar tone and some tasteful licks, which I think we could have heard more of if the synths had been dialed back in the mix. The vocals were no great loss. I will give this one an 8.5, so not in the album of the year category when it comes to black metal, but a worthwhile listen if you want some cinematic post-black metalish tunes.
Posted by Wilcifer at 7:23 AM