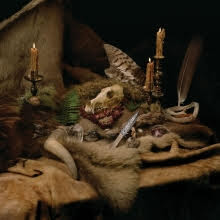 I got onboard with these guys back in 2007, so there has been a great deal of fanfare and shifts since.  The opening track to their new album is beautifully true to who they are and have been as a band with black metal as the core of epic atmosphere and sweeping guitars. The vocals are scowled much in the same manner they were when I first heard them, for a band that has taken us many other places I respect that . I am open for them to do whatever, that is within reason and stays true to the core of their nature worshipping mountain selves. "Spirit of Lightning" does not go for the throat with it's melodic sway but it is still really well done . They do get around to blast beats a few minutes in though this is not a requirement for their songs to be a success. There is an interesting spaciousness to the production of this album. It is much more noted on this song than the first.

Yes there is more atmosphere of a somewhat folky variety than your average black metal band, and they pretty much now have the market cornered on it in America with Agalloch no longer in the picture. With 'Through Eternal Fields " they come closer to what is the status quo for European Black Metal bringing an almost Summoning like scope to their sound which is much more primed for Middle Earth now. It might not be the most original thing , but they do such a good job of it I can not complain. The more deliberate riff that leads into "Primal Chasm" does more for me. There are lower more forceful vocals on that one. The drumming is also very impressive, the double bass is dialed in to the max. It took a second listen to wrap my head around the weird ambiance that prevails in "Underworld Aurora". There is a low croaking kind of singing and the give things more breathing room.

Two and a half minutes into "Masters of Rain and Storm" the remind you that they have not forgotten they are a metal band and understand that metal is very much about bringing the riffs in a big way. No matter how artful you are in your given genre , you have to at some point do this. It requires them to come down from their blast beats and stomp into the guitar. The do this not just once , but a few times over the course of this song. The three minute "Eostre" is really just an ambient interlude or in some versions of the album an outro, the last song on my version is "Skyclad Passage" so for the purpose of this review , is going to be treated as if it is the last song. Though that too proves to be a creepier version of an outro where they are wallowing around in some Coil like noise and ambiance. With that said I will give this album a 9.5 , when ever they decide to write songs which the so for the first five songs of the album, they excel and make one of the years better black metal albums.

Email ThisBlogThis!Share to TwitterShare to FacebookShare to Pinterest
Labels: 9.5, black metal, Wolves in the throne room