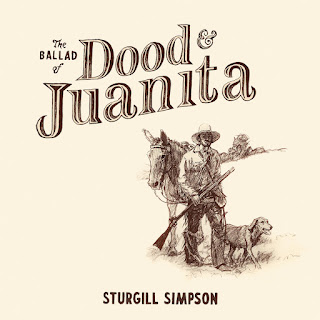 Here is a concept album of sorts . It is more on the bluegrass side of the equation of what he does. The banjo plays a big role as Simpson digs in with a more back hills melody. "One in the Saddle"  finds him picking and grinning his way into more traditional commercial country if we are talking about the 60s and 70s thought with less cross over radio aspirations. The story is about a guy named Dood. I am not really following the plot more than somebody got shot and Shamrock is the name of his horse. Juanita appears to be his wife who this cowboy is going to go look for. The banjo playing picking up as Simpson's voice drops down into more of a Johnny Cash register, and lyrically he is telling stories in a similar manner ,I can also hear some Waylon in there as well. The harmonies of the vocals are tight and effective.  The banjos being shredded here are mind-blowing.

"Played Out" is more of what I expect from him. By expect this is a guy who is not afraid to go way outside of country music, so in this sense I am talking about expect when he takes a legit stab at old school country. The melody has taken me out of the narrative and forget this is a story which is a good thing . |The ode to his dead dog Sam, is just over a minute long but still works as a song. Grind core bands take note/. "Juanita" has a Spanish feel to it's Western sway . It also includes Willie Nelson lending his voice which I am not sure how much more you can ask from country music. Simpson really belts it out in a few places and reminds you he can sing his ass off when he needs to .

We are back to blue grass on "Go In Peace' . Which is cool in the sense that they are jamming out and doing it well, the kicker is I am not hearing as much of who Sturgill is on this one and just him getting the job done. The last find you hear more of that , though he is still paying homage to traditional country.  I will round this album up to a 9.5 , as he is great at what he does, there are a few songs that are a little too blue grass for my normal listening, but I enjoy this for what it is and fans of country music, the real kind not the pop kind will embrace this.